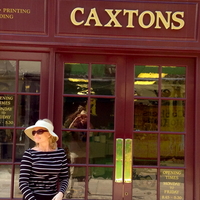 Anne Coldiron, Professor (Ph.D., University of Virginia), specializes in late-medieval and Renaissance literature, with publications on such authors as Chaucer, Spenser, Sidney, Shakespeare, Donne, and Milton. Because of her research focus on French-English literary relations, translation, and early printing, she joined FSU's interdisciplinary program in the History of Text Technologies in Spring 2007.

Her first book issues a strong challenge to traditional literary periodization and canons by examining the large, tri-lingual oeuvre of a 15th-century French poet, Charles of Orleans. Her second book, English Printing, Verse Translation, and the Battle of the Sexes, 1476-1557 (2009), treats popular verse translations of French gender discourses that appeared in the formative early decades of printing in England. Her third book, Printers Without Borders: Translation and Textuality in the Renaissance (Cambridge UP, 2015), studies the early English printers’ and translators’ complex, resistant appropriations of foreign texts.

She currently serves on the board of Architectures of the Book and on the international Board of Directors of SHARP (Society for the History of Authorship, Reading, and Publishing). In December 2012 she led workshops on the Teaching the History of the Book at the Folger Shakespeare Library, and in 2014-2015 she was Director of the Folger Year-Long Colloquium on Renaissance/Early Modern Translation. She delivered the 2017 Erasmus Lecture at the University of Toronto, and in 2017-2018 she was the Berry Chair in English Literature at the University of St Andrews.

Recent publications relevant to the History of Text Technologies include:

"A Survey of Verse Translation from French Printed Between Caxton and Tottel," in Reading and Literacy in the Middle Ages and Renaissance, ASMAR vol 8, ed. Ian Frederick Moulton (Turnhout: Brepols, 2004), 63-84.