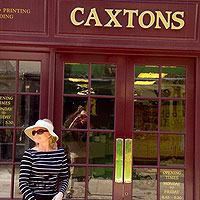 ANNE COLDIRON, Professor (Ph.D., University of Virginia), has primarily worked in the fields of Renaissance/early modern literature and late-medieval literature, with special focus on translation, book history, poetics and poetry, women and literature, French-English literary relations, and literary reception. She joined FSU's interdisciplinary program in the History of Text Technologies in Spring 2007. In 2014-15 she served as Director of the Year-Long Colloquium in Renaissance/Early Modern Translation at the Folger Institute, Washington DC. In 2017-2018 she held The Berry Chair in English Literature at the University of St Andrews (Scotland); in 2018-19, she returned to FSU as George Matthews Edgar Professor of English.

Her first book issues a strong challenge to traditional literary periodization and canons by examining the large, tri-lingual oeuvre of a 15th-century French poet, Charles of Orleans. Her second book, English Printing, Verse Translation, and the Battle of the Sexes, 1476-1557 (2009), treats popular verse translations of French gender discourses that appeared in the formative early decades of printing in England. Her third book, Printers Without Borders (Cambridge UP, 2015), studies the early English printers' and translators' complex, resistant appropriations of foreign texts. (See below for editorial work and other publications.)

She has held several research fellowships, including two from the NEH (National Endowment for the Humanities), a year-long ATLAS grant, a Kluge fellowship, and Folger fellowships (see below for details). She was a collaborator on an Insight Grant from Canada's SSHRC (Social Sciences and Humanities Research Council) for the project now residing at translationandprint.com. Currently she is part of the Trajectories of Translation Project, an international group of researchers funded by the SSHRC (Social Sciences and Humanities Research Council of Canada), for 2018-2022.

Her current projects include books on (a) the English translations of the works of Christine de Pizan and (b) the mutable representations of authors and translators in words and images. She is coordinator of a Special Topic Issue on translation in PMLA planned for publication in May 2023; see CFP, with deadline of June 2021, about halfway down this page. Questions about poetic translation and more generally about literary change (whether translingual and transcultural, socio-historical, and/or material-textual) continue to animate her research.