Canon, Period, and the Poetry of Charles of Orleans: Found in Translation 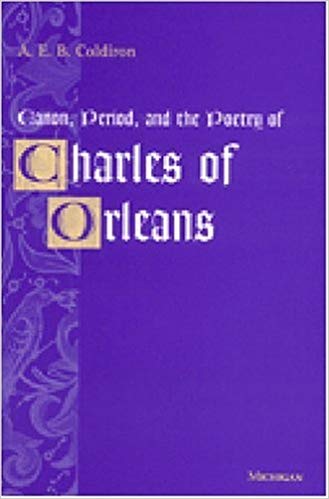 "Canon, Period, and the Poetry of Charles of Orleans" on Amazon
A. E. B. Coldiron

Now, for the first time ever, there is a study of the poetry of Charles of Orleans that considers together the English, French, and Latin versions of this large and important body of lyric. Charles was a captive in England following the battle of Agincourt, pulled literally from beneath a heap of bodies and armor. During his twenty-five-year imprisonment, Charles wrote hundreds of poems in French and English, including the over 6,500 lines that form the first single-author lyric book in English. Coldiron analyzes several aspects of the poetry's significance, including its positions in literary history and theory, and its unusual challenges to medieval and Renaissance period categories. This well-written book explores Charles's poetic subjectivity and also presents unprecedented original primary research on the poet's final manuscript, a French-Latin book in facing column format. With theoretical sophistication, literary sensitivity, a richly contextualizing comparative method, and common sense, Coldiron argues that these translations connect cultures, languages, and literary traditions that were undergoing a crucial moment of conflict and separation just before the Tudor period.

This book will be useful to a wide range of literary scholars, particularly those interested in cross-cultural literary relations, comparative literature, or the history of poetry in French and English. Scholars of medieval and early-modern poetry and those interested in the history of literary translation will be particularly interested in the ground breaking work contained here, yet a wider scholarly readership will also find its insights and approaches applicable in many other areas of literary inquiry. Lucidly written, the book displays theoretical sophistication without jargon and makes a significant contribution to our understanding of this important but understudied figure, as well as to our understanding of early modern literary translation.