English Printing, Verse Translation, and the Battle of the Sexes, 1476-1557 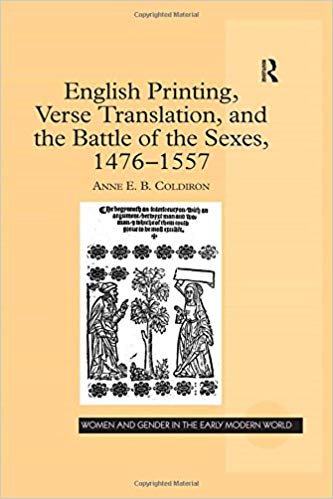 "English Printing, Verse Translation, and the Battle of the Sexes" on Amazon
A. E. B. Coldiron

Bringing to light new material about early print, early modern gender discourses, and cultural contact between France and England in the revolutionary first phase of English print culture, this book focuses on a dozen or so of the many early Renaissance verse translations about women, marriage, sex, and gender relations. Anne Coldiron here analyzes such works as the Interlocucyon; the Beaute of Women; the Fyftene Joyes of Maryage; and the Complaintes of the Too Soone and Too Late Maryed as well as the printed translations of writings of Christine de Pizan. Her selections identify an insufficiently discussed strand of English poetry, in that they are non-elite, non-courtly, and non-romance writings on women's issues. She investigates the specific effects of translation on this alternative strand of poetry, showing how some French poems remain stable in the conversion, others subtly change emphasis in their new context, but some are completely transformed. Coldiron also emphasizes the formal and presentational dimensions of the early modern poetic book, assessing the striking differences the printers' paratexts and visual presentation strategies make to the meaning and value of the poems. A series of appendices presents the author's transcriptions of the texts that are otherwise inaccessible, never having been edited in modern times.