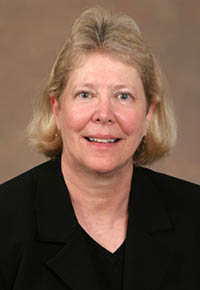 KATHLEEN BLAKE YANCEY, Kellogg W. Hunt Professor of English and Distinguished Research Professor, focuses her research on composition studies generally; on students' transfer of writing knowledge and practice; on creative non-fiction; on cultural studies of everyday writing; on writing assessment, especially print and electronic portfolios; and on the intersections of culture, literacy and technologies.

In addition to co-founding the journal Assessing Writing and co-editing it for seven years, she is the immediate past editor of College Composition and Communication, the flagship journal in the field. She has also authored, edited, or co-edited sixteen scholarly books and two textbooks as well as over 100 articles and book chapters.

Yancey has recently published several edited collections. Her most recent collection, ePortfolio-as-Curriculum: Models and Practices for Developing Students’ ePortfolio Literacy (2019), defines ePortfolio literacy and identifies multiple curricula, integrated into a traditional course or designed into a portfolio-specific course, for fostering such literacy. Her co-edited Composition, Rhetoric, and Disciplinarity, released in 2018, outlines different models of disciplinarity as it inquires into whether, and how, Composition and Rhetoric constitutes a discipline with historically unique characteristics and challenges. Assembling Composition, edited with Stephen McElroy for the CCCC SWR series and released in 2017, examines and illustrates assemblage through three lenses-- theory, school, and the world. And her edited A Rhetoric of Reflection, released in 2016, considers reflection from multiple perspectives, including transfer, multimedia, assessment, and race and language.

In 2014, her co-authored Writing across Contexts: Transfer, Composition, and Sites of Writing was published; it demonstrates the efficacy of a new writing curriculum, Teaching for Transfer (TFT), and articulates a new theory of prior knowledge located in theories of assemblage, remix, and critical incidents; it won both the 2015 CCCC Research Impact Award and the 2016 Council of Writing Program Administrators Best Book Award. It has also provided the foundation for two CCCC-sponsored research grants supporting a first-of-its-kind study of the efficacy of TFT curriculum across 8 diverse institutional sites.

She has served as president or chair of several scholarly organizations: the National Council of Teachers of English (NCTE); the Conference on College Composition and Communication (CCCC); the NCTE College Section and the College Forum; the Council of Writing Program Administrators; and the South Atlantic Modern Language Association (SAMLA). She serves on several boards, including the National Board for Miami University's Howe Center for Writing Excellence and on the Executive Board for the Association for Authentic, Experiential and Evidence-Based Learning (AAEEBL), and she is serving as a mentor for WASC's Community of Practice for Advancing Learning Outcomes Visibility. She also serves on editorial boards for several journals, including for College English; Kairos; Computers and Composition; and Double Helix. Earlier boards she has served on include the Steering Committee of the 2011 National Assessment of Educational Progress (NAEP) and the Steering Committee for the Association of American Colleges and Universities (AAC&U) VALUE project focused on electronic portfolios.

Yancey is also the recipient of several awards, including the Florida State Graduate Mentor Award, the FSU Graduate Teaching Award (twice), the Donald Murray Prize, the CWPA book award (twice), the CCCC Research Impact Award, the South Atlantic Review Best Essay Award, the Purdue University Distinguished Woman Scholar Award, and the CCCC Exemplar Award, considered by many to be the highest honor in Rhetoric and Composition. In 2019, she received the National Council of Teachers of English Squire Award, “given to an NCTE member who has had a transforming influence and has made a lasting intellectual contribution to the profession.”

Her current research includes two book projects: The Way We Were: A Cultural History of Everyday Writing in the 20th Century United States; and a second book project, The Art of Composing in Writing: Lessons in Assemblage and Materiality. In addition, she is the lead PI for an 8-site study of the TFT writing curriculum supported by CCCC and CWPA Research Grants (http://writingacrosscontexts.blogspot.com/)