A Rhetoric of Reflection 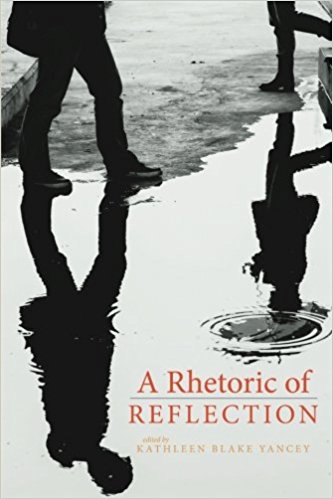 "A Rhetoric of Reflection" on Amazon
Kathleen Blake Yancey

Reflection in writing studies is now entering a third generation. Dating from the 1970s, the first generation of reflection focused on identifying and describing internal cognitive processes assumed to be part of composing. The second generation, operating in both classroom and assessment scenes in the 1990s, developed mechanisms for externalizing reflection, making it visible and thus explicitly available to help writers. Now, a third generation of work in reflection is emerging.

As mapped by the contributors to A Rhetoric of Reflection, this iteration of research and practice is taking up new questions in new sites of activity and with new theories. It comprises attention to transfer of writing knowledge and practice, teaching and assessment, portfolios, linguistic and cultural difference, and various media, including print and digital. It conceptualizes conversation as a primary reflective medium, both inside and outside the classroom and for individuals and collectives, and articulates the role that different genres play in hosting reflection. Perhaps most important in the work of this third generation is the identification and increasing appreciation of the epistemic value of reflection, of its ability to help make new meanings, and of its rhetorical power—for both scholars and students.