Four undergraduate English majors—David Advent, Talise Burton, Colby Blackwill, and Erin Christopher—won 2018 IDEA Grants for their research projects, developed under the supervision of English department faculty members. FSU's Center for Undergraduate Research and Academic Engagement and the Office of the President sponsors the annual funding of the projects. Each student presented his or her project at the 2018 President's Showcase of Undergraduate Research Excellence.

David Advent: “The Dorset Chronotope: An Ecocritical Reading of Thomas Hardy’s Jude the Obscure and The Mayor of Casterbridge”

Reading an author’s works allows a person only so much insight into what the author was thinking during the writing of the books. To gain a better understanding and more awareness of English novelist Thomas Hardy and his novels, Florida State University English major David Advent recently immersed himself in the Victorian realist’s environment. 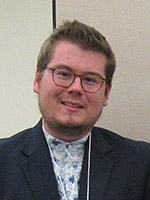 Specifically, Advent traveled to the area where Hardy spent most of his life, Dorset County in England, to inspire Advent’s own research and academic breadth. Advent’s trip abroad capped his current studies into Hardy, and helped finalize his FSU Center for Undergraduate Research and Academic Engagement IDEA Grant project, titled “The Dorset Chronotope: An Ecocritical Reading of Thomas Hardy’s Jude the Obscure and The Mayor of Casterbridge.” Along with other IDEA Grant winners, Advent presented his poster project on October 1, 2018 at the President's Showcase for Undergraduate Research Excellence

Before he embarked on his project, Advent already had a strong literary background in Hardy, having read many of his novels, including the two for his project, which also is his honors thesis.

“Most of the understandings I had of Hardy concerned how he and his novels were environmentally oriented, as Dorset is a primarily agricultural setting,” Advent says. “But, my understanding of the environment in his novels at that time was limited only to the setting, not to any specific motifs or metaphors.”

Undergraduates at Florida State are familiar with the process of scouring course offerings and looking for classes they want to add to their academic schedules. Talise Burton, a senior majoring in English, decided she wanted to build one of those courses for students to consider. And FSU’s Center for Undergraduate Research and Academic Engagement rewarded Burton with an IDEA Grant to help carry out the uncommon plan. 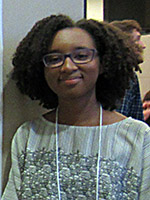 “It’s unusual for an undergraduate to create a course and ask the university to implement the course,” Burton says.

She worked and researched with Dr. Molly Hand on her project, which is focused on creative entrepreneurship. Hand is the English department’s entrepreneur-in-residence.

“This has been a real exciting time for me and Dr. Hand because the experience is so unique,” Burton says. “For me, it shows I have that growth that many students at this university have, as well as access to the resources to do anything and to create anything. So, previously what was impossible has become possible through the resources and faculty at this school.”

Florida State University undergraduates who win IDEA Grants have to select a faculty supervisor to guide and mentor them through the research and completion of their project. Senior English major Colby Blackwill chose English Professor Jimmy Kimbrell, and Kimbrell has the highest praise for Blackwill and his academic excellence. 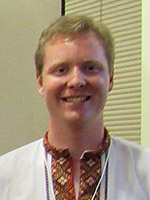 “I cannot recall ever having the honor of mentoring an undergraduate student who is more immersed, ambitious, and capable than Colby Blackwill,” Kimbrell says, “and I have had many wonderful students during my nearly two decades at FSU.

Blackwill is a senior English major, with a concentration in creative writing. His IDEA Grant project, “Chernobyl: The Legasov Syndrome, Exile and Return to Home,” stems from his longtime interest in the history of nuclear energy, going back to middle school. He knew quite a bit about the Three Mile Island accident, which occurred in 1979 and is the most significant nuclear power plant incident in U.S. history.

“When I looked at Chernobyl, though, I thought ‘wow, I’ve never heard of that and there is so much I don’t know about it,’” says Blackwill, referring to the 1986 accident in the Soviet Union town of Pripyat. “I read about it, I watched documentaries about it – the story was so dramatic and compelling.”

When people find out a college student is earning an English degree, they likely think that student is focused strictly on historical or modern literature, creative writing, or rhetoric and composition. Most of those people probably have not stepped foot in an English department in many years, though. 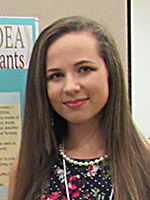 Erin Christopher is a Florida State University senior who is using all of the skills and resources the Department of English offers to forge her own path within the discipline. In 2018, with a boost from an FSU Center for Undergraduate Research and Academic Engagement IDEA Grant, Christopher created a project showcasing her two creative and academic passions: script writing and new media research.

Titled “The Presentation of Visual Details in Modern Audio Drama, 2012-2017,” Christopher presented her poster project on October 1, 2018 at the President's Showcase for Undergraduate Research Excellence. Christopher is a senior whose English major concentration is creative writing, and she also studies French as a minor. She focuses her research interests on the field of new media studies, and she specifically investigates the emerging literary conventions of the digital age.

“The funny thing about my project is while my research and creative processes strictly concerned the aural, the stimulus for my IDEA was visual,” Christopher says. “I was on social media, and had noticed a lot of artwork for a particular podcast. These works were created by multiple, unassociated artists, but their interpretations of these characters and worlds were continuous.”