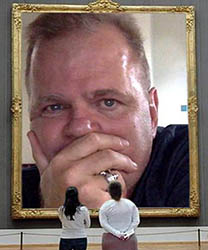 MARK WINEGARDNER, who writes fiction and nonfiction, is the Burroway Professor of English. He was born and raised in Bryan, Ohio, near what was once known as Exit 2, a town of 8,000 which supplies the world with its Dum-Dum suckers and Etch A Sketches. He is the winner of a University Teaching Award and is the department’s only two-time winner of the University Mentoring Award. He has also won grants, fellowships and residencies from the Ohio Arts Council, the Lilly Endowment, the Ragdale Foundation, the Sewanee Writers Conference and the Corporation of Yaddo.

A contributing writer to ESPN the Magazine and The Oxford American, Winegardner’s work has also appeared in such magazines as GQ, Men's Journal, The New York Times Magazine, Playboy, Ploughshares, Five Points, Doubletake, Story Quarterly, and TriQuarterly. The varied subjects of his National Magazine Award-nominated nonfiction have included art forgery, Cuban defectors, a giant Punjabi teenager, Congressman Louis Stokes, the Clown Prince of Baseball, the Southern Literary Mafia, and the first viral video to cause a felony arrest.

He also helped write the script for The Godfather video game (all platforms), creating original dialogue performed by such actors as James Caan, Robert Duvall, and (in his final professional gig) Marlon Brando.

He’s now working on a novel about a school shooter.