As the spring 2019 semester came to a close, the Department of English took time to celebrate the outstanding people who teach, mentor, and learn in the Williams Building and beyond.

The department’s annual awards ceremony included the usual turns of shining a spotlight on the exemplary Florida State University students who major in the field. This year’s event also featured a few twists, though, and one of those honored English Professor and much-beloved mentor David Kirby.

During the April 12 event, the department formally announced undergraduate and graduate student winners in outstanding writing and teaching categories as well as honored undergraduate and graduate students for their overall academic achievements. Emcee and English Professor Diane Roberts guided the proceedings, handing out several undergraduate awards and inviting designated department faculty members to the Conradi Theatre stage for several specific presentations. All of the awards are named after English department and university donors. (See the end of the article for the full list of winners.) 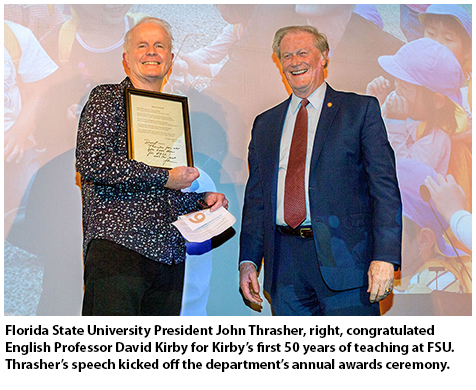 Before the student procession began, however, Kirby sat house left with his wife Barbara Hamby, and they listened with others in attendance as Florida State University President John Thrasher delivered a congratulatory speech encapsulating Kirby’s first 50 years at FSU.

“This is truly an honor to recognize the fiftieth anniversary of a professor who has had such a profound impact on generations of Florida State University students,” Thrasher said in his opening remarks. He talked about Kirby arriving to teach at FSU in 1969, four years after Thrasher graduated from the university. “I don’t know if you know this or not, but we didn’t have a creative writing program then, so he established one. And it’s now considered as one of the most successful programs of its kind in America.”

Thrasher described Kirby as a professor who is seen all around FSU’s campus, sitting and speaking with students about their own writing, as the prolific author calls on his own vast experience in publishing scores of poetry books, essays, and biographies, among other writings.

“Somehow, while he’s been doing all of that, a half century has flown by,” Thrasher said. “Along the way he’s received about every single recognition that this university can bestow. He was named the Robert O. Lawton Distinguished Professor in 2004, which is the highest award you can receive because it comes from the faculty itself. He’s one of their own.”

Kirby’s enthusiasm for teaching inside and outside of the classroom has earned him numerous university teaching awards, Thrasher added. He listed several other honors for Kirby, including a Guggenheim Fellowship in 2003 and the Florida Lifetime Achievement Award for Writing in 2016.

Thrasher then humorously pointed out that he expects Kirby to stay in his job for years to come.

“If all of this is starting to sound a little bit like a retirement party, let me set you straight right now: David’s not going anywhere,” Thrasher said. “He’s not allowed to retire, at least not as long as I’m president.”

Thrasher even took the opportunity to emulate Kirby with a poem of his own, titled “Ode to the Kirb,” which included the lines “His students, they say, are numerous and great/ I should take his class; I hear it’s first-rate/ But instead I offer best wishes for many more years/ Congratulations, my friend; to you I say, ‘Cheers!’”

Kirby followed Thrasher with his own comments, injecting good-natured ribbing at the president.

“Well, you don’t get poems like that every day,” Kirby said. “John, cut it out. Who needs the competition?”

In true “Kirb” fashion, he kept his speech brief, saying, “we want to get to the people for whom this occasion has really been convened.” He did joke that this honor is the only one he knows for sure he truly deserved. Not that the enormity of being at FSU for five decade was lost on him.

“The thing I can’t wrap my mind around is all of the people who have come and gone, and I’m still here,” he said. He reiterated that the event was not a retirement party, and he continued to joke with Thrasher. “I want to retire under a better president. No, John and I have been kidding with each other since the get-go. You just know when you can talk trash with people.” 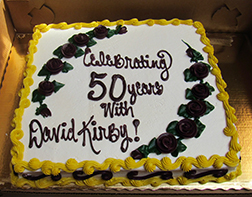 Kirby reverted to straightforward appreciation when he thanked his colleagues, his students—“I’ve always learned from you, and I always will”—and the numerous department chairs he has seen in the position. He added that “it wouldn’t be right to not mention our staff as well,” before listing them by name and saying, “they can’t be thanked enough.”

He finished by pointing out that saying “thanks” was not enough to express his gratitude toward his wife. No words, he said, are enough.

“I’ll just say, ‘no Barbara, no David’—at least not this David,” he said, adding he looks forward to the next 50 years. (Read more information about David Kirby's 50 years at FSU here.)

Kirby then called to the stage Department of English chair Gary Taylor, who announced the establishment of the David Kirby Graduate Fellowship for Creative Writing. The original fundraising goal was to reach $5,000 in 48 days, but the fellowship hit that mark on April 16, four days after the awards ceremony. The current goal is $12,500, and the fund was at $9,509 as of May 1. Taylor said the ultimate monetary plateau is to play off of Kirby’s time in the department.

“The purpose of this fund is to eventually raise $50,000, or $1,000 for every year David has been here so far,” Taylor said about the fellowship, which will support FSU graduate students in creative writing, specifically poets in the program. “Every year we will increase the amount we want in the fund, so we hope he stays on for many, many more years.”

Taylor also announced that Ken Lewandowski, who earned a bachelor’s degree in 1977 and a master’s of fine arts in 1980 from FSU, has made a deferred gift of $164,000 to the Jerome and Maxine Stern Creative Writing Endowment. Jerome Stern was a creative writing professor at FSU from 1966 until his death in 1996, and Lewandowski considered Stern to be his most influential mentor. (Watch a video of President Thrasher’s speech, David Kirby’s comments, and Gary Taylor’s announcements here.)

Taylor then turned the festivities over to Diane Roberts, who continued the ceremony with the naming of award winners.

The department’s Bertam and Ruth Davis Award for Outstanding Career as a Graduate Student went to both creative writing doctoral student Dorothy Chan and rhetoric and composition doctoral student Amy Cicchino. (Read more about Dorothy and Amy here.) Adam Pickens, who is a first-year doctoral student in literature, media, and culture, won the department's Samuel Beckett Summer School Essay award, which provides financial support for Pickens to study in Dublin during the summer of 2019. 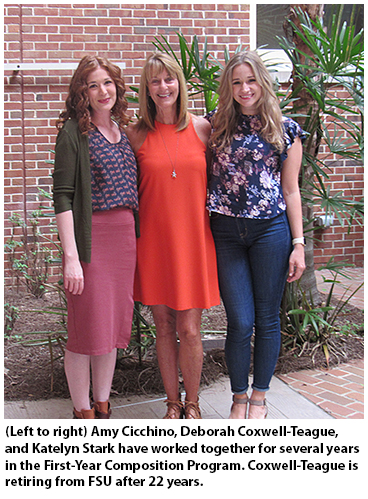 Cicchino and Stark spoke about the impact Coxwell-Teague has made on them as scholars and as people during their academic careers at FSU. They then presented Coxwell-Teague with a bouquet of flowers.

Coxwell-Teague recalled her childhood in Crawfordville, Florida, and how when she was an adolescent, her father would drop her off in downtown Tallahassee to shop and walk around.

“I remember standing at the corner of Monroe Street and College Avenue and looking down the hill at the Westcott Building and the fountain,” she said. “I knew I would end up at Florida State.”

She eventually earned her bachelor’s degree in English education and journalism from FSU, and she added her master’s degree in reading and language arts while she taught at local high schools. She returned to FSU full-time as a doctoral student and earned the first Ph.D. in rhetoric and composition ever awarded at the university.

“I'm ready for a change, but I've absolutely loved my years of working with the teaching assistants at FSU,” she said.

Some of those teaching assistants likely had the two undergraduate awards winners in a class. David Advent won the Fred L. Standley Award for Undergraduate Excellence and Erin Christopher won the Louis and Mart P. Hill Award for Outstanding English Honors Thesis. Both won university IDEA Grants and presented their projects in October 2018 at the President’s Showcase of Undergraduate Research Excellence.

Associate Professor Rhea Lathan, the department’s director of undergraduate studies, commended Advent and Christopher for their academic accomplishments. The two winners leave FSU and the English department with fond memories and bright expectations for their futures.

“I’m just thankful for all of the different opportunities I’ve had at FSU and in the English department, such as working with Dr. Barry Faulk on the IDEA Grant,” Advent says.

Christopher also will remember the influential and supportive professors she has been privileged to work with at FSU.

“I am going to be proud of where I come from in terms of my undergraduate education,” she said. Christopher begins a master’s program at UCLA in the fall of 2019. “I’m going to be working with students from around the world and I get to represent FSU and what an English education means and what it can produce.” (Read more about David and Erin here.)