Ahead of the Sept. 1, 2020, launch of News Nation, Graban most recently led a session for the network’s staff training in diversity, equity, and inclusion/bias. In this session, she covered “Reporting on Difference,” which focused on selected principles from communication theory, discourse theory, and neutrality in the public sphere. 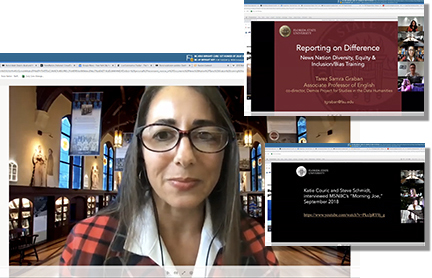 In April of 2020, Sandy Pudar, News Nation’s director, and Jennifer Lyons, the vice president of News at WGN America, reached out to Graban to discuss their creation of the prime-time newscast, which is billed as “unbiased” in its presentation of the day’s news. The next month was spent in conversation to determine how Graban’s expertise correlated with their ideas and vice-versa, and what Graban might bring to a summer training session as a consultant for their staff.

Originally, Graban was to create a training module on language use; however, she thought that news neutrality could not be achieved based on language use alone, nor should it be the only critical issue for them to consider.

“We found common ground at some point,” Graban explains, “and I offered to plan a training module that could support the idea of a prime-time cable newscast trying to operate along bipartisan lines, to report objectively on disagreements, and to equip viewers to make informed assumptions based on critically observant uses of language.”

After a few conversations, they found a middle ground in a shared desire to help make news less sensational and to encourage news audiences to be more thoughtful consumers of media.

Graban then organized her training module around four questions: Is it possible to foster a culture of fact-based reporting that also appreciates uncertainty? What does it mean to exercise good judgment, and do we have a precise grasp on what judgment is? How does one report expert information to non-expert audiences, who need or want succinct conclusions, without reducing complexity? Does balanced reporting contradict or support the goals of democratizing information?

Achieving ‘neutrality’ in the public sphere is less a matter of perfecting the message and more a matter of making informed observations about how information circulates. So, where they are necessarily more concerned with news delivery, I am more interested in reception of ideas.

“Achieving ‘neutrality’ in the public sphere is less a matter of perfecting the message and more a matter of making informed observations about how information circulates,” Graban says. “So, where they are necessarily more concerned with news delivery, I am more interested in reception of ideas.

“At the same time, I understand their desire to shape a newscast around global and local interests, and not around sensationalism, and to create a newscast that isn't necessarily a right- or left-wing response to ‘the other side.’”

Originally scheduled to host the training sessions in-person in Chicago, travel restrictions prevented the sessions from occurring as planned, and they were held in an online setting instead. During this time, Graban’s role for News Nation also involved consulting on rehearsals and giving input on scripts for the show. The launch of the segment required more preparation in this respect, she says.

“I watched several days' worth of rehearsals prior to their launch, submitted comments and notes, and have been on hand to answer any queries from their staff,” Graban says. “I also suggested a fairly long list of other scholars and teachers across the country whom they could contact to watch broadcasts, read scripts, and offer input.” 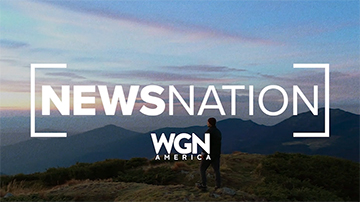 In Graban’s role with News Nation, she hopes to see people learn to experience difference as authentically dialogic.

“That may or may not happen in my lifetime, and I don't think that is News Nation's ultimate goal-a newscast isn't like a talk show, so there isn't time to carefully and explicitly consider different positions on an issue when you are delivering headlines, though my argument would be that we need more newscasts to do exactly that,” she says. “Still, participating with them in this way on the launch of their newscast represented, for me, one small step toward that end. I think they have a ways to go before they succeed, but I sincerely hope that they do.”