Florida State University English major Emily Schutz is an experienced competitor for academic scholarships. While attending school, Schutz has applied for and received scholarship money throughout her undergraduate career. 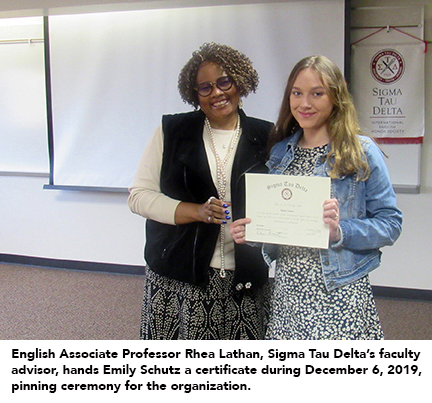 “I found out about this scholarship through Sigma Tau Delta’s social media team for the FSU chapter,” explains Schutz, who is secretary for the campus chapter, Rho Epsilon. “Our team researches interesting topics to post, and I decided it was worth a shot to apply for the Regent Scholarship.”

The organization awards distinction to high-achieving students in English literature, language, and writing. There are approximately 900 chapters in the U.S. and abroad, and Rho Epsilon boasts 70 dedicated student members.

The national chapter advertises stipends, scholarships, and internships for members of the different chapters. Depending on funds and application numbers, a Regent Scholarship is awarded to the highest scoring applicant from each region.

FSU’s chapter members are eligible for the Southern Regent Category Scholarship. Schutz applied in early April 2021, and the organization replied rather quickly—she found out she won on May 20.

“The application process requires letters of recommendation and a written component,” Schutz says. “I had to write about a story that I appreciated and explain why.”

Schutz is on the editing, writing, and media track for her major because FSU does not have a college of journalism, and her studies as an EWM major have evolved into social activism. Specifically, she had an interest in Miami Herald’s investigative reporter, Julie K. Brown. As a journalist, Brown conducted research and reported in November 2018 on the Jeffrey Epstein sex trafficking cases in the Palm Beach, Florida, area.

As a Palm Beach County resident, Schutz lives about 10 minutes away from Royal Palm Beach High School, which is one of the schools where Epstein trafficked underaged girls. Schutz’s old high school is also near Epstein’s house in Palm Beach area.

Schutz says she appreciated how Brown’s reporting “brought the story to light, and the cases made a large impact” on the area. Brown’s articles “prevented other girls from experiencing this trauma,” Schutz adds.

Thus, for the Regent Scholarship application, Schutz wrote about Brown, her work as a journalist, and how she has inspired Schutz’s future career plans.

Despite Schutz’s scholarly excellence in English, she was not sure what she wanted to study when she enrolled at FSU in 2017. However, she always loved reading, and she particularly enjoyed magazines.

“When I started at FSU, I did my first semester as an exploratory student,” she says.

“Besides being a member and an officer of Sigma Tau Delta, I was also part of Her Campus, and I was both a shoot director and a writer for Diverse World Fashion Magazine, a publication on campus,” she explains. “With my love for reading magazines, I thought it would be a cool opportunity to become a travel journalist.”

Schutz also took her talents off of FSU’s campus. She was a writer for RentTally.com, a member of ILS Network, as well as an editorial intern at Joyce Publishing in Tallahassee.

While writing and attending school, Schutz applied her knack for finding and receiving scholarship money for her undergraduate career.

“As an undergraduate student, I applied to many scholarships such as Florida Bright Futures,” she says. “I also have cystic fibrosis, which is a chronic illness. There are a decent number of scholarships for those who have CF, including the Elizabeth Nash Foundation Scholarship.”

Being a self-starter to begin the application process, organized to meet deadlines, and diligence to follow through are all traits that make Emily stand out from others.

“Emily demonstrates a high capacity to be organized and is a self-starter,” Cherry-Randle says. “For many students, they look at scholarship applications, and they think they might like to apply for the scholarship. In the end, they never actually apply.

“Being a self-starter to begin the application process, organized to meet deadlines, and diligence to follow through are all traits that make Emily stand out from others.” 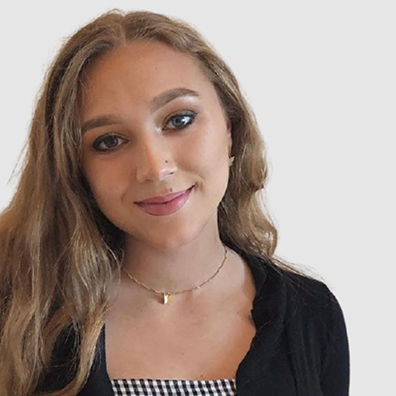 Schutz graduates from FSU at the end of July 2021 with her bachelor’s degree, and she plans to use the Southern Regent Category Scholarship funds to pay for graduate school at the Columbia University College of Journalism, which she will attend in the fall.

Reflecting on her time at FSU, Schutz recognizes the value of the network she has formed.

“As an English major, I was able to meet people who had the same interests as me, and I ultimately built a community with these individuals,” she says.

Schutz offers guidance to students who may be wondering where to begin at FSU.

“My advice is to join organizations like Sigma Tau Delta,” she says. “This is a great organization to join, and I want to make sure that members take advantage of the benefits from the organization.”

Cherry-Randle, who is a doctoral student in FSU’s Literature, Media, and Culture Program, wishes Schutz the best on her new journey in the fall.

Cherry-Randle emphasizes the importance of perseverance and encourages Schutz to never give up.

“When you think you cannot do anymore, stop and think about why you started down on this path to begin with,” she says.

Schutz found a rewarding course as an undergraduate, and her accomplishments in FSU’s English department suggest continued success on her future journeys.