Dustin Pearson draws from personal experiences, aesthetic factors as inspiration for his poetry

For Dustin Pearson, sights, sounds, textures, and colors serve as the inspiration behind his writing.

Pearson, a Florida State University doctoral student in English-Creative Writing, says a number of diverse sources influence his writing and, thus, he covers a wide range of topics in his pieces.

“I tend to think it’s most exciting to write from places of ambivalence, angst, and strife, so those concepts are also colossal inspirations,” he explains. 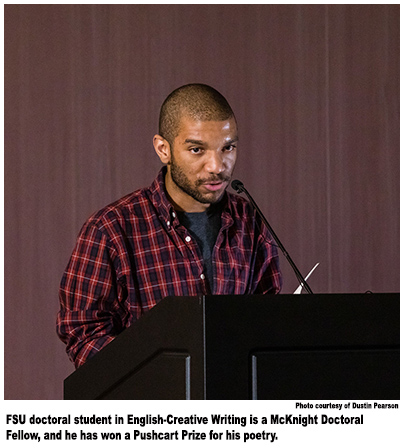 family, among other issues important to him, and his discoveries affect his writing based on what he is focusing on at the time. No matter what his current research focuses on, though, he always utilizes personal experiences to draw writing inspiration from, especially in terms of aesthetic.

In terms of visualization of his pieces, he thinks his poems are particularly suited for being adapted into 2D animation such as hand-drawn animation. Particularly sensitive to textures, tones, colors, scents, and sounds, Pearson prefers to listen to soft and moody piano and string music while writing. He is also inspired by histories and cultures, especially the ones found in coastal South Carolina, where he was born and raised.

“I like thinking about the ocean and the buildings and the food and the people and the dialects, but I’m also trying to find smarter frames for these influences, the specific West African and Native American influences, the immigrant communities, the histories,” he says.

A McKnight Doctoral Fellow, Pearson earned his Master’s in Fine Art in creative writing-poetry from the University of Arizona in 2017. After graduation, he wanted to further his education while belonging to a solid community of fellow writers. When searching for Ph.D. programs, Pearson took into consideration the size and reputation of FSU’s Department of English, and he knew that studying in Tallahassee was the right choice for him.

“The idea of having a big pool of artists to build community with was something that excited me,” he says.

His writing follows no set theme or story, he says, partially due to his fear of stasis, but also because of the organic life transitions he constantly experiences in his own personal life. Using these experiences as fuel for his writing, he tries to highlight them in an aesthetic fashion.

I like to think of the writing as holding a magnifying glass to different aspects of that experience. The aesthetic presentation of the resulting writing is determined by how much I prioritize my internalized perception of what I’ve experienced or a more assimilated or recognizable one, which I think people most often call reality.

“I like to think of the writing as holding a magnifying glass to different aspects of that experience,” Pearson says. “The aesthetic presentation of the resulting writing is determined by how much I prioritize my internalized perception of what I’ve experienced or a more assimilated or recognizable one, which I think people most often call reality.” 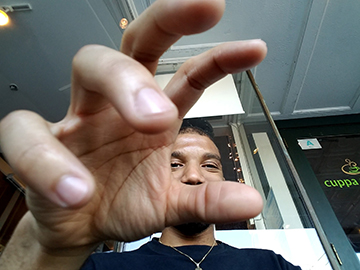 “That poem was so surprising, and the first of my poems from which a whole world sprouted, even if with a few years’ delay,” he explains. “I won a Pushcart Prize for that poem, but before that, I felt it was so personal yet not based in any mundane or day to day sense of reality.”

English Professor James Kimbrell, Pearson’s doctoral committee chair and advisor, has been a crucial part of Pearson’s endeavors while at FSU, and Kimbrell has witnessed, firsthand, Pearson grow in his creative pursuits as a writer.

“It has been a pleasure to work with Dustin both in and out of the classroom and to watch him grow as an artist over the course of three manuscripts, Millennial Roost, A Family Is a House, and A Season in Hell with Rimbaud,” he says. “Dustin sets a high bar for himself and his enthusiasm and dedication to his work is contagious.”

The creative process, for Pearson, begins with his daily observations, using experiences with people and objects to conceptualize new ideas and poem topics. “I’m a cerebral person that tends to compartmentalize, so I’ll think on a subject until words or images associated with that thinking start to materialize,” he says. “When the yield amounts to images or phrases or whole scenarios, I’ll begin to write them down.”

After transferring his thoughts into written words, he negotiates whether or not the product is finished—or at least “worthy” of a reading experience.

“What that means for me personally is rendering a portion of the reality that only exists in my mind,” he says, elaborating on his writing rituals. “I hope to work up to letting the compartments spill into each other. I think that would revolutionize the potency of my writing, which I think is quiet but powerful.”

Pearson is the recipient of fellowships from organizations such as Cave Canem, the Bread Loaf Writers’ Conference, the Virginia G. Piper Center for Creative Writing, and he also has served as the editor of Hayden’s Ferry Review and as the Director of the Clemson Literary Festival. He won the Academy of American Poets Katharine C. Turner Prize and the 2019 FSU English department’s John Mackay Shaw Academy of American Poets Graduate Award. His writing has appeared in Blackbird, Vinyl Poetry, Bennington Review, The Literary Review, and Poetry Daily, among others.

In the years ahead, Pearson is willing to be surprised in terms of where his writing takes him. While aspiring to be beyond financially stable, he hopes to meet and collaborate with artists and have more experiences with people who are enabled by his writing.

“I hope that it gives readers something they need whether they were consciously seeking it out or not,” he says. While Pearson tries not to project specifics in terms of how he hopes his writing moves readers, he hopes they find his work to be as insightful to them as his process is to him.