The Function of Proverbs in Discourse: The Case of a Mexican Transnational Social Network 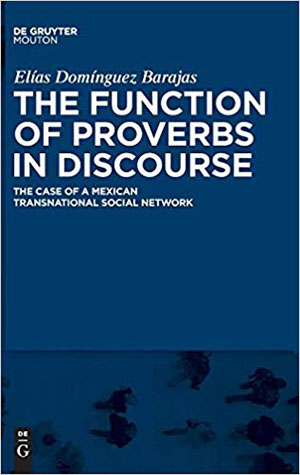 "The Function of Proverbs in Discourse" on Amazon
Elias Dominguez-Barajas

Grounded primarily in the ethnography of communication and aligned with the multidisciplinarity of discourse analysis, the book examines the use of proverbs in the daily life of a social network of Mexican-origin transnational families in Chicago and Michoacán, Mexico. Various and detailed analyses of actual proverb use reveal that proverbs in this particular population function as a highly contextualized communicative strategy that serves four discrete social functions: to argue, to advise, to establish rapport, and to entertain. Proposing that the social and cognitive aspects of language use must be combined for a complete understanding of how such genres of language are actually used by regular people in daily life, the author shows how ordinary people use sophisticated cognitive processes to interpret the socially-relevant meanings of proverbs in everyday conversation. The book provides an unusual mix of contextualized discourse analysis that is ethnographic, linguistic, and cognitive, yielding much needed insight into a segment of the Mexican-origin population of the Midwestern U.S., a population whose increasing importance and size is often mentioned, but about which precious few linguistic studies have been conducted. The volume not only helps to fill this void but it is also one of the few studies that focuses on the impact of transnationalism on linguistic practices, regardless of cultural group. Departing from the conventional approach of ignoring the role of everyday-language use in order to focus exclusively on culture, economics, or migrant patterns, the book makes linguistic practice the central issue, and thus affirms that it is language that weaves together the two distant sites of transnational communities, providing a fertile area for understanding the perspectives of the transmigrants themselves.