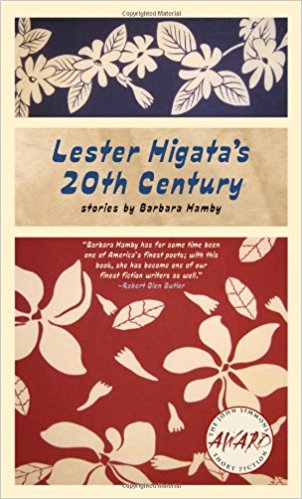 “Lester Higata knew his life was about to end when he walked out on the lanai behind his house in Makiki and saw his long-dead father sitting in a lawn chair near the little greenhouse where Lester kept his orchids.” Thus begins Barbara Hamby’s magical narrative of the life of a Japanese American man in Honolulu. The quietly beautiful linked stories in Lester Higata’s 20th Century bring us close to people who could be, and should be, our friends and neighbors and families.

Starting in 1999 with his conversation with his father, continuing backward in time throughout his life with his wife, Katherine, and their children in Hawai‘i, and ending with his days in the hospital in 1946, as he heals from a wartime wound and meets the woman he will marry, Hamby recreates not just one but any number of the worlds that have shaped Lester. The world of his mother, as stubbornly faithful to Japan and Buddhism as Katherine’s mother is to Ohio and conservative Christianity; the world of his children, whose childhoods and adulthoods are vastly different from his own; the world after Pearl Harbor and Vietnam; the world of a professional engineer and family man: the worlds of Lester Higata’s 20th Century are filled with ordinary people living extraordinary lives, moving from farms to classrooms and offices, from racism to acceptance and even love, all in a setting so paradisal it should be heaven on earth.

Never forgetting the terrors of wartime—“We wake one morning with the wind racing toward us like an animal, and nothing is ever the same”—but focusing on the serene joys of peacetime, Lester populates his worlds with work, faith, and family among the palm trees and blue skies of the island he loves.