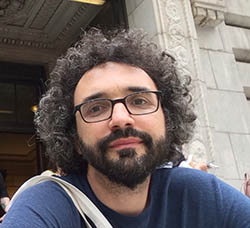 JOHN MAC KILGORE, Associate Professor, Ph.D. University of California, Davis (2012), is a scholar and teacher of American literature and culture, especially of the early national period and the nineteenth century.

Professor Kilgore’s research broadly looks at literature's engagement with political dissent: protests, revolutions, insurrections, liberation and reform movements. His first book, Mania for Freedom: American Literatures of Enthusiasm from the Revolution to the Civil War (2016), uncovers a tradition of “literary enthusiasm” in the early national period linked to a politics of emancipation and rites of democratic dissent, from the “mob” insurgency of the American Revolution to insurrectionary slaves in the black Atlantic to indigenous resistance to US expansionism in the War of 1812. Analyzing authors such as Phillis Wheatley, Mercy Otis Warren, Nathaniel Hawthorne, William Apess, Harriet Beecher Stowe, Martin Delany, and Walt Whitman, Professor Kilgore shows how literatures of enthusiasm transform aesthetic labor into a species or inciter of popular revival and revolt.

While Professor Kilgore teaches an array of courses, both in and outside his primary field of research, his recurring—and most popular—course offerings include “Old Florida: Literature, Place, Public Memory,” a survey of early Florida literature put in conversation with sites of public memory—museums, monuments, memorials, and other heritage sites—in and around Tallahassee; “The Old, Weird America: Early American Performance and the Literary Expression of Popular Culture,” a study of the aesthetics of popular theater, music, and other performance genres in the early United States from spirituals to burlesque, circus to jazz; “Blake, Dickinson, Whitman (in the Age of Digital Archives),” a critical reevaluation of three major Romantic poets read through electronic scholarly editions and digital archives; and “Bob Dylan,” a course on the literary expression of Bob Dylan’s music in cultural and historical context.

LIT 4304: The Old, Weird America and the Literary Expression of Popular Performance

AML 4111: The "Great American Novel" of the 19th Century
ENG 3014: Alice in Theoryland (An Introduction to Critical Theory)