Several years ago, the Tallahassee community was searching for more arts and culture events to land in the capital city. So, former city commissioner and author Mark Mustian gave the area the Word of South Festival, a literature, music, and arts event that brings books to life and rhythm to the streets.

Mustian founded the festival in 2015, and the three-day experience gives Tallahassee the perfect blend of authors and musicians sharing their passion. Florida State University’s English department is well represented on the schedule, with readings and discussions by current faculty members and alumni.

Mustian describes the origin of Word of South on his website, markmustian.com. Mustian had published his novel, The Gendarme, which sparked his creativity in other ways. 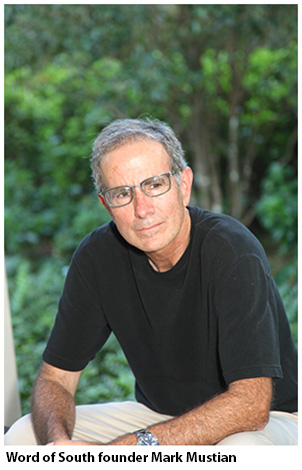 “With the publication of The Gendarme, I was invited to speak at a number of literary festivals, and began to think: why couldn’t we do this in Tallahassee? I was on the City Commission at the time and needed to wait until I got off to try it, but after I was no longer a commissioner (and after a lot of thinking about ‘do I really want to do this?’) a group of us decided to give it a go,” Mustian writes. “Rather than being just like every other book festival, though, we decided to try and be something different, and to combine books with music.”

Mustian describes the festival as one of the most interesting arts and culture festivals created, because it’s not every day that you see authors reading on stage and teaming up with musicians to bring their sounds to the words.

The inaugural festival was held in 2015 at Cascades Park, where the event continues to call home. Since its beginning, the festival has shown Tallahassee residents what they were seeking in terms of a weekend devoted to arts and culture. This year’s festival starts the night of Friday, April 12 with a concert by The Currys and Shakey Graves, and performers are lined up all day Saturday and Sunday. The event also offers an extensive amount of entertainment throughout the weekend for children from ages 2-18, who can experience a variety of fun with literature.

With her eyes on the authors, Lu Vickers, who earned her Ph.D. in English from FSU, is looking forward to this year’s festival. Vickers, a writing professor at Tallahassee Community College,  is an author of Florida history and a National Endowment for the Arts Fellowship award winner for her book Remembering Paradise Park: Tourism and Segregation at Silver Springs. 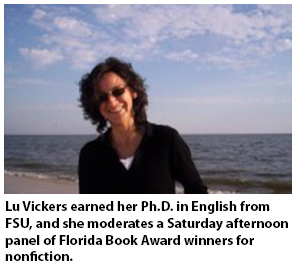 Vickers moderates a Saturday afternoon panel of Florida Book Award winners for nonfiction that includes Luis Martinez-Fernandez, Jim Ross, Gilbert King, and Bruce Horovitz. During last year’s festival as a moderator, Vickers made a connection with Tameka Bradley Hobbs, who earned her doctoral degree from FSU in U.S. history, and historical administration and public history. Hobbs recently gave a talk on her book, Democracy Abroad, Lynching at Home: Racial Violence in Florida, as part of a series in conjunction with Vickers’ Remembering Paradise Park exhibit at TCC.

“Being a moderator is cool because I get to hear several writers at once,” Vickers says. “I am really looking forward to hearing Gilbert King, not only on the panel, but also after our panel when he gets up with [FSU English Professor] Diane Roberts.”

As a festival regular, Vickers has her favorite artist circled on the schedule: “I am looking forward to being taken to church by The Como Mamas,” she says.

Spencer Wise, who earned his Ph.D. in creative writing from FSU, makes a return to Tallahassee for the festival. In a Saturday afternoon appearance, he will read from his 2018 novel The Emperor of Shoes. Wise shares the stage with FSU English Professor Robert Olen Butler. 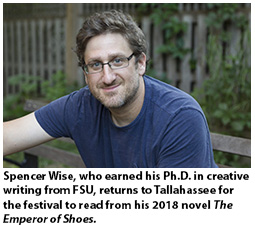 “I’m going to be reading from and talk about my novel, and then I’m going to ask Robert Olen Butler, my mentor and friend, some questions about his latest book, Paris in the Dark,” Wise says. “It should be awesome. He’s hilarious.”

Wise is currently assistant professor of English at Augusta University in Georgia. He is happy to be back in the capital city for this weekend’s festival.

“The FSU students are fantastic; the town is gorgeous; I enjoyed my time in Tallahassee immensely,” he says.

He calls the Word of South festival “incredible,” and says Mustian is “a fantastic novelist, and also a superhero for putting this festival together.”

And he even tried once to use the festival for a little music magic.

“I saw Lisa Loeb because her famous hit “Stay” is one of the only songs my wife can play on the guitar. She plays it a lot,” Wise says. “I thought taking her to hear the original might cure her. Didn’t work. Made it worse.

“So Word of the South is one of the greatest literary and music festivals in America, but it can’t perform miracles.”

The event may not produce miracles, but attendees are certain to enjoy the sights and sounds. Others artists this year who have a correlation with FSU’s English department include D.M. Aderibigbe, Barbara Hamby, Mark Hinson, Erin Hoover, Ravi Howard, Kathleen Laufenberg, Diane Roberts, and Mary Jane Ryals.

For more information on Word of South, visit https://www.wordofsouthfestival.com/.

FSU senior English student Olivia Cameron, who is on the editing, writing, and media track, contributed to the writing, research, and reporting of this article.