Student of the 2000s made a name for herself, writing poetry with a relic from the 1950s

Without knowing what it meant for her future, Jacqueline Suskin pursued a degree in what inspired her most: poetry.

In 2007, Suskin earned her bachelor’s degree in English with a focus on poetry. After graduating, she set out from Tallahassee to travel the world with her eyes wide open, searching for new experiences to inspire her writing.

She bicycled through North and South America, filling up journal after journal with narratives. A few months later, Suskin returned to the U.S., but she wasn’t ready to settle down.

She continued her travels. This time, through the continental U.S. She worked odd jobs in various places and remained dedicated to her work as a writer, recording the stories of the people she encountered along the way. Her post-college career began with an impulse buy in Pasadena, California. 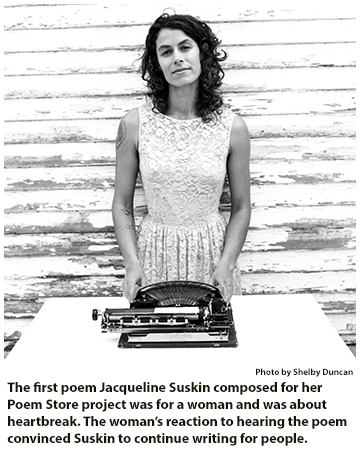 “I got this typewriter,” Suskin recalled in a 2015 Tedx Talk, “a very strange thing for someone who is traveling around the world because it’s heavy and you have to lug it and take it with you.”

She knew the Royal Companion was meant for her as soon as she saw its worn, grey body and the dark forest green keys sitting comfortably on an apple box.

“It was kind of the key to the rest of my life,” she said. “Sometimes you can purchase something and it changes everything. My typewriter totally changed my life.”

After purchasing the typewriter in L.A., Suskin went to Oakland where she met Zachary Houston, a poet and artist who introduced her to his profession: performance-based improvisational poetry: “He invited me to go out with him and he was like, ‘Do you have a typewriter?’ and I was like, ‘Yes. I do have a typewriter. I got it two days ago.’”

With her typewriter in tow, she went with Houston to a street fair in Oakland to practice the art of improvisational poetry. There Suskin began to understand the powerful effect that her unique prose could have on the world.

“I wondered if I’d be able to write something quickly for someone,” Suskin said.

After Suskin wrote the poem, she read it aloud. The woman, visibly overcome with emotion, told Suskin that it was exactly what she needed.

“I knew from that moment that Poem Store is something really important,” Suskin told the audience members at her Tedx Talk. “I approached it as an experiment, but I also thought that this is something that is maybe going to turn into a career. I could see the hint of what it was meant to be.”

Suskin then moved into a small house on the side of a mountain in Humboldt County, California, where she devoted herself to poetry. She found inspiration among the redwood trees. Every Saturday, she would go into town to set up her typewriter at the Arcata Farmers’ Market. Eventually, she became known as the “town poet.”

“The truth is, I combined two of my really strong talents and skills,” she says in a recent video interview. “I love to write poetry, but I also love to connect with people deeply. I combined these two parts of myself into this experiment and it just took off from there.”

Suskin has made a living for herself as a poet in Los Angeles for the past five and a half years, not an easy accomplishment. Many people move to L.A. in hopes of realizing their dreams. Though the odds were stacked against her, Suskin’s unique voice, persistence, and focused work ethic contributed to her success.

Her work has been featured in The New York Times, T Magazine, Los Angeles Times, The Atlantic, Man Repeller, Reader’s Digest, Better Homes & Gardens, and the Huffington Post. She has written poems for numerous celebrities including Oprah Winfrey—who was brought to tears —Maria Shriver, Drew Barrymore, Cheryl Strayed, and Gwyneth Paltrow. She was even honored by former first lady Michelle Obama at the White House.

“Art is really healing for people,” Suskin explains. “We read these books and we love them because we resonate with them. Having a way to take it to the next level and the level beyond that is to sit with someone who writes just for you. I think that’s why it’s such a special experience for people.”

But she didn’t stop with her Poem Store project. In an effort to spread the power of poetry to the mainstream, Suskin has had five books published, all of which display her unique talents as a writer and empathetic communicator. Her first book, The Collected, published in 2010, is an assemblage of found photographs accompanied by narrative poems, an endeavor she started at FSU.

“We live in this world now where we’re not actually held in these formations of ‘this is what this work is made of and there’s a path you should follow,’” she says. “That can be really daunting because no one is telling you what to do and no one is there to guide you, but it’s also really liberating because you can choose whatever you want your job to look like. You can totally just make it up. My job is a made-up, weird job that I continue to make up day after day.”

When people question the security of her career, Suskin reminds them that there is a lack of security in everything.

“No job is permanent and no path is exact,” she says. “If you open yourself up to creating something on your own, it will probably make you happier because you’re the one who knows what inspires you and what parts of yourself are the strongest parts that you can weave together to put into your everyday practice.

“It turns into a creative expression that is different and unique because those parts of yourself that you combine will make up a thing that no one has ever made up because you’re not like anyone else.” 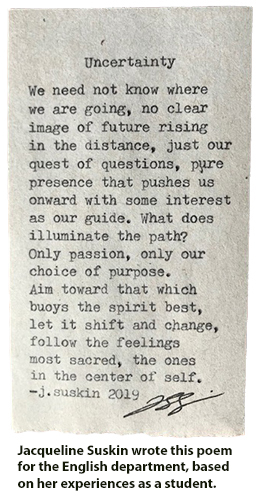 Studying poetry at FSU without truly knowing what it meant for her future was a simple decision for Suskin because it was the thing that inspired her most: “[In college] I was more concerned with how I was going to survive as a happy and functional part of society in a way that felt respectful to me.”

“My professor who worked at FSU at the time, Ginny Grimsley, once said to me that the thing that worked for her was looking at her life and asking, ‘Am I living a life that I respect?’” she continues. “For some reason that really resonated with me. All that really matters is to look at your life and say, ‘I respect this thing that I’m doing in this world,’” Suskin says.

Grimsley, a visiting faculty member in creative writing from 2001 to 2005, says that she never considered herself Suskin’s teacher—they taught each other.

“Jackie was fully fledged before she even walked through the door. She was ready to go.” Grimsley says. “She is an authentic poet, and by that I mean, she is able to see things clearly and communicate that to others—the beauty in the world and equally, the ugliness in the world and is still able to love all of it, bringing it back to the rest of us. She is that person. She has this energetic, healthy spirit… a way of being able to connect with other people…. It inspires a lack of judgment. Whatever you show her of yourself, she’s gonna love you anyway. That’s the spirit of a poet.”

Suskin thinks of her poems as “little definitions” that translate what is going on between her and the people who come to her, requesting poems. She lets her own experiences inform her poetic lens in the process of interpreting what she is being told.

“I’ve gone through a lot of hard things. I have experienced a lot of trauma in my life,” Suskin says. “Because of that, I can see and understand people’s pain. It allows me to translate it.... It’s an empathetic exchange that’s beyond anything I learned in school.”

With nearly 40,000 of her spontaneous poems in the hands of people all over the world and the conclusion of her most recent book tour that took her to Washington, D.C., New York City, Vermont, and Utah, Suskin has returned to Humboldt County in Northern California where she will continue her work. She also will spend a year as artist-in-residence at Folklife Farm, a shared community that connects people through farming, sustainable energy, music, art, and spirituality.

“You don’t always get to know that as the author or storyteller what your story provides, but because I’m in this unique position to have these actual relationships with people, I get to see how powerful it is,” Suskin says. “That gives me hope for all other kinds of storytelling too. We should be doing this. It’s really important.”

Melissa Kindma is completing her final semester at FSU. She graduates in December 2019 with a bachelor's degree in English and a concentration in editing, writing, and media.