Associate Professor Robert Stilling's Beginning at the End: Decadence, Modernism, and Postcolonial Poetry garnered another honor in early December. The Modern Language Association named his book as Honorable Mention for its Prize for a First Book. The Modernist Studies Association previously announced in October that Stilling won the MSA's 2018 First Book Prize.

"This second recognition confirms Stilling's status as one of the leading literary scholars of his generation," wrote English Professor and Chair Gary Taylor in a congratulatory email. "We're lucky to have him here in Tallahassee."

The MLA committee’s citation for Stilling’s book reads "In a series of brilliant readings, Robert Stilling offers a new understanding of anticolonial anglophone cultural production, one in which liberatory aims are best served, counterintuitively, not by the nationalist arts of social realism but rather by a cosmopolitan modernist poetics of decadence: arts and literatures that celebrate the aesthetic for its own sake."

"With Oscar Wilde appearing, surprisingly but repeatedly, as a valued touchstone for postcolonial writers and visual artists such as Agha Shahid Ali, Derek Walcott, Bernardine Evaristo, and Yinka Shonibare, Beginning at the End: Decadence, Modernism, and Postcolonial Poetry rediscovers the queer anti-imperial politics of Wildean aestheticism and shows how it aided later writers and artists—even those who explicitly derogate decadence in art—to celebrate empire’s decline and embrace antirealism’s power to imagine and effect change," the citation continues.

Stilling says the scope of impressive books and scholars who were nominated with him for both awards is encouraging as a first-time book author.

“It’s been the case for a long time that we have far more great scholars doing amazing work than we even have jobs for,” he says. “I just feel lucky that awards like this will bring new readers. I think we all just hope our work will be read and make some sort of difference in how people think.” 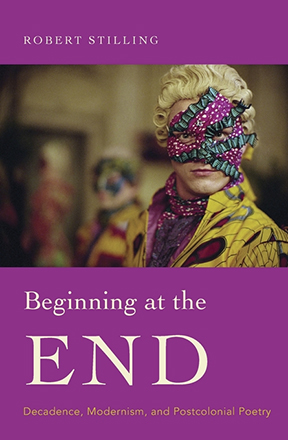 Brian Glavey, associate professor of English Language and Literature at the University of South Carolina and chair of the First Book Prize committee, wrote in his citation about Beginning at the End that “This major publication gives new and global life to decadence.” Glavey summarizes the focus of Stilling’s research, and he lists the postcolonial writers and artists included in the research, such as Agha Shahid Ali, Derek Walcott, and Wole Soyinka to Yinka Shonibare, Bernardine Evaristo, and Derek Mahon.

“What initiates this colloquy is the shared conviction that only a decadent poetics could capture the historical sensation of ‘beginning at the end,’” Glavey writes. “Stilling beautifully describes how decadence allowed these figures to mediate between the desire for an autonomous individualism and the demands of burgeoning cultural nationalisms, which saw collective futures arising out of Europe’s fall.”

Glavey finishes by writing, “This is a deeply learned and original work that shows the necessity of bringing modernist and postcolonial studies together.”

Stilling accepted the MSA award October 17 at the annual MSA conference in Toronto, where he also presented his paper “Decadence, Islamic Fundamentalism, and the Politics of Cultural Translation,” which he says is “a bit of a follow up to Beginning on the End.” Looking back, Stilling says the book emerged out his dissertation, but the real origin dates back to his coursework in graduate school at the University of Virginia.

“I found myself in two seemingly unrelated seminars, one on Fin-de-Siècle ‘decadent’ literature and the other on cross-cultural poetry, in which we read a lot of modernist and postcolonial poetry,” he says. “There was one poem I read in the later course that really stuck with me, ‘The Dacca Gauzes’ by Agha Shahid Ali, a Kashmiri poet who wrote most of his work in the 1980s and 1990s. The poem begins with an epigraph from Oscar Wilde’s The Picture of Dorian Gray, considered a quintessentially ‘decadent’ novel of the 1890s.”

The poem goes on, Stilling says, “to trace the history of a rare and exquisitely delicate fabric once woven in Dacca (Dhaka) in the colonial era and prized by Wilde’s dandy protagonist. Ali’s poem mentions how the British allegedly cut off the hands of Bengali weavers to keep them from competing with British textile manufactures.

“The story is apocryphal, but the idea for writing about ‘postcolonial decadence,’ a combination of decadent aestheticism (involving the pleasure taken in beauty and art) and a postcolonial critique of a sometimes brutal history, really starts with that poem.”

The research process for Stilling, he says, “is always some combination of serendipity, luck, intuition, and persistence.” In particular for this book project, however, the archival research inspired him the most.

“There’s nothing like going to a special collections library and getting a hands-on feel for a writer’s manuscripts, drafts, letters, and so forth,” he says. “I ended up writing almost as much about archives themselves as the material I found in them.”

Once he collected the material for the book, Stilling let the actual writing part play out in a familiar way for him.

“I enjoy writing, but I usually write best if I wait until the ideas pile up and organize themselves in my head and I have a stretch of a few days to write continuously,” he says. “Then it’s a matter of just getting it all into a Word document and editing it over and over and over again. I prefer to print things out and mark drafts by hand. When the weather’s nice, I write on my porch.”

And holding the final product in his hands evoked a mixed reaction for Stilling.

“The truth is, when you work on a project for so long, it’s hard to know what to do with yourself and what to make of it all when it’s done, other than to say ‘I love the cover,’” he says. “The book has been out for more than a year and I’m only now starting to get some perspective on it.”

A new aspect of that perspective is now knowing that major associations acknowledged the importance of Beginning at the End: Decadence, Modernism, and Postcolonial Poetry. But Stilling is already thinking ahead to his next project.

“I have a few pieces that have been on the back burner while I was working on the book, but I’m increasingly intrigued the how literary decadence works in our present era of global migration,” he says. “I’ve been looking in particular at how Islamic thought frames the idea of ‘decadence’ (in history, art, society) in relation to how European writers have thought about it.”

Note: The photo of Robert Stilling on the front has been modified.