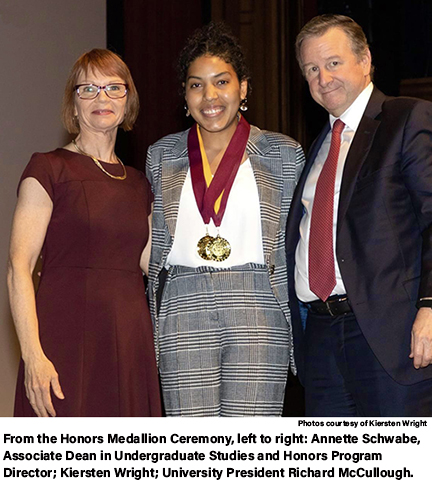 Each academic semester, the Honors Program recognizes graduating seniors who have distinguished themselves by completing three exceptional academic achievements:

To achieve any of these distinctions is a noteworthy accomplishment; achieving all three is a rarity. Kiersten Wright, who graduated in Spring 2022 with her bachelor's degree in English-Creative Writing, earned a well-deserved spot on this semester's list.

In addition to that honor, Wright was a 2019 Gates Scholarship recipient, an award funded by the Bill & Melinda Gates Foundation. She was one of 300 students chosen from a pool of approximately 36,500 applicants across the country, and she served as a Squad Leader at The Gates Scholarship Summer Institute in 2020 and 2021.

How do you think earning the Outstanding Senior Scholar recognition will set you apart from other graduating seniors?

I don’t think anyone can deny that all 5,560 graduates this past semester worked extremely hard to earn their bachelor’s degrees, and, as a first-generation college student, I am just truly grateful to be one among the thousands graduating. When it comes to employment and other opportunities, however, I do feel that this university distinction will help support any claims I make about being driven or about having a strong work ethic, setting me apart from other hard-working individuals.

Could you explain/summarize the requirements for this distinction? The Honors site reads that students need to “complete three exceptional academic achievements.” How did you plan your semesters at Florida State University to tailor to these program requirements?

The second requirement is to complete the University Honors Program, which means an Honors student must earn eighteen Honors points. There’s a specific system for how the program calculates these points and different ways to earn them, but I gained my points mostly by taking courses specifically labeled “Honors.” I often found that these classes focused on the most unique topics and provided the best learning environments for me.

The final requirement is to complete an Honors in the Major (HITM) project, which is an undergraduate thesis you must defend in front of a committee. HITM was a last-minute decision for me and, therefore, a requirement that did not initially impact how I planned my semesters. Luckily, though, I had been working closely with Degree in Three and my academic advisor since my first semester at FSU to ensure that I could take a semester and the summers off and still graduate early. Thus, I had room in my schedule to build in the additional thesis courses required by the English HITM program.

Your honors thesis was Sunonoma. Could you please describe the inspiration behind your project and give a description of the contents?

Sunonoma is a three-part poetry collection inspired by the process of spiritual awakening and my personal experiences. I also like to think that the collection pays homage to poets from all eras and traditions, including medieval writer Dante and modern-day rappers. I know that the concept of spirituality can be off-putting for some and is often met with skepticism or disdain. For that reason, I wanted to make Sunonoma enjoyable for all readers, even with its underlying spiritual messages. 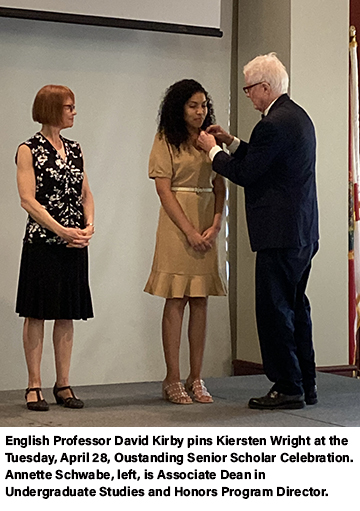 One particular message that proves central to this collection is how human interactions can lead to a sense of oneness with the universe but also the formation of one’s singular self. In my life, human interaction is a spiritual practice just as powerful as more traditional practices such as meditation. I incorporated an audio component in this project that allows readers to click on the title of any poem and hear me read it aloud, which I hoped would emphasize the possibility of togetherness despite our individual voices. Overall, I would say that Sunonoma is an interdisciplinary project and academic in tone, but, at the same time, the work may be deceptively simple. In reality, every decision about this collection was informed and consciously made; every word choice and line break is deliberate. The result, as my thesis director once said, is a style that is “whimsy combined with big-heartedness” and “three-dimensional” in its use of “science, romance, and more.”

Robert O. Lawton Distinguished Professor of English David Kirby directed your thesis. Could you describe what that process was like and how Professor Kirby helped you through the steps?

Because I had never considered myself a poet until the semester I took Professor Kirby’s poetry workshop—when he suggested that I do HITM—the entire process was a bit intimidating at first. As a new poet, I was nervous about working with an accomplished writer and distinguished professor. However, Professor Kirby helped me tremendously by encouraging me and allowing me to express my most authentic self through my poetry. I think that when we set out to complete academic projects like theses, we often feel the need to mute our personalities in an attempt to appear “professional.” The poet often feels that their flowery, formal language must speak louder than their own true voice. However, during the year that I worked with him, Professor Kirby never dismissed any of the unconventional ideas I sent him or wanted to tone down the playful poems that I showed him. That is precisely why poems like the feminist piece “sed a solo deo,” for example, are free to explore religious texts in one line and to mention icons Dolly Parton and Patti LaBelle or allude to Sigmund Freud and Emily Dickinson in the next. By the time I defended my thesis, I had a collection that I was proud of, one that was undeniably “Kiersten” and one that I felt comfortable discussing with my committee, thanks to Professor Kirby.

Did you have any downsides or struggles when completing the three exceptional academic achievements?

Since my HITM thesis was a creative project that chronicled my spiritual transformation at specific points in time, I believe that I outgrew the poems in the collection’s first section on both a spiritual level and in skill. I found that I no longer connected with those earlier poems when I finally finished my thesis. Therefore, I think my main struggle was fighting the urge to completely scrap the beginning and accepting those poems as pieces that I wrote when I was somewhat of a different person—as pieces that demonstrate my spiritual growth, just as they should. Generally, I also think that when you work on a long-term creative project, you become so familiar with that project that you kind of just get tired of looking at it and may struggle to see the beauty in the final product. 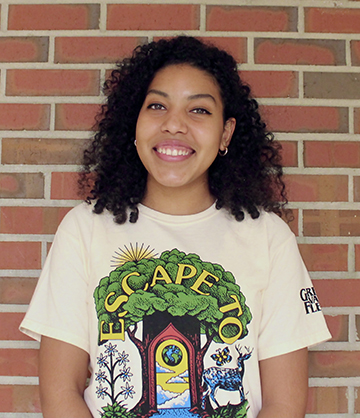 What advice would you give to any English students who want to earn the Outstanding Senior Scholar achievement?

Without a doubt, I would first say to commit to the endeavor early in your college career so that you have the maximum amount of time to complete each requirement. Many Honors students tend to graduate early, so not only do they have heavier course loads each semester, but they also have less time to earn the necessary Honors points and less time to complete their HITM theses. I certainly wish I had decided to pursue this achievement earlier so that I would have had three rather than the minimum two semesters to complete my thesis. From there, I would say establish genuine relationships with professors, faculty, and staff. Their support is ultimately what will make this achievement possible.

What plans do you have post-graduation?

I never wish to limit my interests or confine myself to one career (which I think is apparent in Sunonoma!), so I will soon be moving to Los Angeles and shifting my focus from creative writing to acting for the camera. I have been taking acting classes with private coaches for a while now and have discovered the art to be one of my many passions, so the shift just feels right. Between my job, acting classes, and auditions, I will always make sure that I find time to type out a literary essay, to pen another short story, or, of course, to compose a few more poems.