The Association of University Presses recently announced that Ned Stuckey-French, professor of English at Florida State University who passed away in June 2019, is the organization’s inaugural AUPresses Stand UP Award honoree. 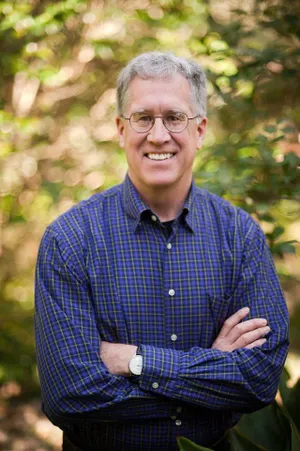 to support, defend, and celebrate the university press community,” according to a press release. “The award is intended to recognize advocates who are not on staff at a member press but who stand up from within the communities that presses work with, speak to, and serve.”

The announcement came at the AUPresses 2020 annual meeting, and Stuckey-French's efforts were celebrated with a short video during the Association’s virtual 2020 Annual Meeting. Stuckey-French’s colleagues acknowledged his commitment to the cause, and they expressed the mixed emotions that the posthumous award brought to mind.

“This is another wonderful recognition of Ned's contribution to higher education and America culture far beyond FSU and Tallahassee,” English Professor and department Chair Gary Taylor says. “And a reminder, too, of how much we all miss him.”

Stuckey-French devoted much of his time and energy to ensure that university presses remained as an essential resource not only for academics to publish their works but also for undergraduate and graduate students who are considering a career in academic publishing. He regularly sent department emails to promote these efforts, and he worked closely with other faculty members to provide vibrant discussions when representatives from the field came to campus for talks and workshops.

“I started on this because of my book and because I thought it was wrong. It was personal,” Stuckey-French said at the time. “But as it went on, I saw that public higher education is under attack.”

In early October 2012, the University of Missouri reversed its decision, and its university press continues to publish academic works.

“This is a big victory for writing, for scholarship, for academic presses, for the people of the state of Missouri and for public higher education,” Stuckey-French said at the time about the outcome.

Dyan Neary is a doctoral candidate in English-Creative Writing at FSU, and in the spring of 2020, she received the English department’s inaugural Ned Stuckey-French Fellowship Award. Neary recalls the interactions she had with Stuckey-French.

“Ned was a brilliant, generous mentor with a great sense of humor, and one of the most approachable professors I've ever known,” she says. “He’d engage with anyone, even people with whom he staunchly disagreed, because he believed that open discourse—both in writing and in life—was key to creating a more just and honest world.

“Ned deserves this award more than anyone. He was committed to the mission of university presses, and to writing and publishing as a vocation.”

Stuckey-French’s legacy will continue to help support the work that the Stand UP Award recognizes and honors.

The full story from AU Presses about Stuckey-French’s award can be accessed here.