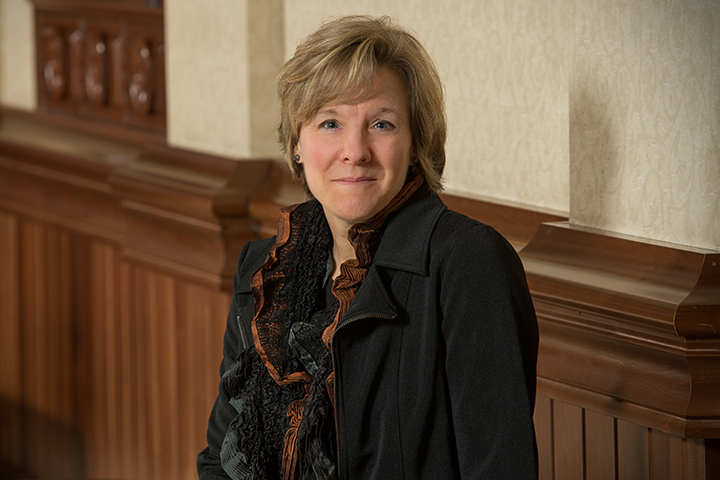 Meegan Kennedy recently received a big boost from the National Endowment for the Humanities, and thanks to its support, she soon will be able to resume her research full time into some of the little things in life. Very little things.

The NEH announced in early December that Kennedy would receive a year-long fellowship, which gives her a $50,400 financial award, which is a salary replacement, and time to complete her book, Beautiful Mechanism: The Bounds of Wonder in the Victorian Microscope. Kennedy, associate professor of English and core faculty member with the History and Philosophy of Science Program, has been busy with administrative duties and extra work in teaching and course development, making it difficult to finish Beautiful Mechanism.

"It's a huge relief to have the time to finish the book, finally; I'm looking forward to having that chance to focus singlemindedly on this project, which has been kind of an obsession of mine for some time," Kennedy says.

Winning an NEH grant for this book has particular meaning for Kennedy because of the nature of the work and her interdisciplinary scholarship. She teaches both Victorian literature and the history of science and medicine, placing her in "three very rich fields, with distinct conventions of evidence and argument."

"It can be a tricky balancing act, but getting the NEH tells me I am doing something right," Kennedy says. "While I would never agree that the humanities' role is simply to explain or tell the story of science, I do think that this book also makes a case for why the humanities are necessary - in part, to provide an external perspective on a construct as fascinating and complex as the microscope, to show what it was before it became what it is now."

The origin for Beautiful Mechanism dates back to when Kennedy was doing research for her 2010 book, Revising the Clinic: Vision and Representation in Victorian Medicine and the Novel, and she discovered how Victorians were writing about the microscope. When she noticed what she refers to as Victorians' "fearful romance" with the instrument, "I knew I had to write about it," Kennedy says. 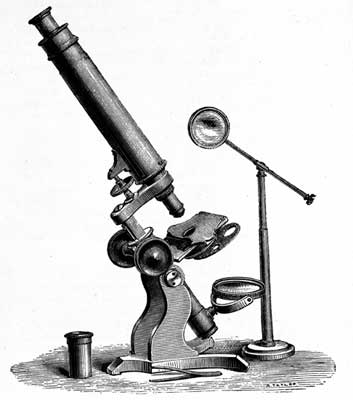 "The microscope is fascinating because in the Victorian period, it's both an icon of science and of religion, and also - somewhat unbelievably - of mass media," she says, referring to the projection microscope. "The microscope is the 'beautiful mechanism' that's also seen as integrally flawed."

On her blog, Kennedy writes that in Beautiful Mechanism she will "examine the skeptical sublime, when microscopists juxtapose a visionary, romantic language invoking wonder and a cautionary, realist language outlining humans' limitations. This dual mode offers two perspectives on a single scene: an observer probing the infinitesimal through a gleaming brass tube.

"In domestic and imperial, professional and mass culture, the microscope and its infinite, disjunctive space helped construct a modern observer at once detached, anxious, and disciplined; enthusiastic, mass-mediated, and sensational," she adds.

Kennedy's research for the book so far has uncovered a microscope music hall song, the notebooks and microscope of the famous malariologist Ronald Ross, slides with microscopic writing, and "amazing advertisements that were in boxes of uncatalogued ephemera in the John Johnson Collection at Oxford."

"That's a wonderful collection," she says, "and we have access to some of the catalogued and digitized material through Strozier Library's subscription to the Chadwyck database."

Before winning this NEH fellowship, a Florida State University Committee on Faculty Research Support grant as well as two summer fellowships - one an NEH stipend and the other a Huntington-Linacre Exchange grant - helped support Kennedy's research for her project.

"The process of applying is time-consuming, and it's difficult to get the rejection notices, of course," she says. "But rewriting the narrative about the project sharpens my sense of what I'm doing and makes my application better; I think the smaller grants also help legitimize the project."

Kennedy had a strong university support system to help her with the most recent fellowship application, which she submitted in April 2016. Peggy Wright-Cleveland, director of the Office of Faculty Development, provided advice and perspective on the process, which includes writing a narrative about the project and soliciting letters of recommendation.

Kennedy says she is grateful for the backing provided by English Chair Eric Walker - "he has been a wise counselor throughout," Kennedy says - and College of Arts and Sciences Dean Sam Huckaba as well as Associate Dean Laurel Fulkerson. Kennedy also appreciates the support of her English department colleagues Anne Coldiron, Candace Ward, and Leigh Edwards, as well as Michael Ruse, chair of the History and Philosophy of Science Program, and Fritz Davis during her work with that program.

"Anne tirelessly encourages and supports us all with reminders about Council on Research and Creativity and NEH opportunities," Kennedy says.

The NEH emailed her the morning of December 7 with the offer.

"It was a pretty terrific way to wake up," she says.

Most of the research for the book is finished, Kennedy says. During the fellowship she will write the final chapters of the book and revise previously drafted chapters by including research from a summer fellowship in Oxford. She will likely make a trip to the UK to finish research loose ends there and to double-check references.

She has presented a lot of her current research at conferences in both Victorian studies and the history of science, using her conference papers "as a way to clarify my thoughts on a piece of my argument and get feedback from intelligent people."

"The response has been encouraging so far," Kennedy says. "Some good opportunities, like invited talks and essay invitations, have come out of conference paper conversations. But ultimately, the book needs to be in print, right?"

Which is not such a little thing, but a goal that has been made easier thanks to her NEH award.