The great evolution: Technology in Florida State's Department of English, 10 years in the making

A few dinosaurs reside within the Williams Building.

Not any literal ones, of course. Instead, an example is the ancient iMac desktop that slumbers in Associate Professor Ned Stuckey-French’s office, a relic of the past that serves to highlight the radical metamorphosis in technology that has occurred during the last 20 years.

Stuckey-French says his inoperative iMac is an “icon” and serves as a reminder of what the department had before the switch to professors having personal laptops in their offices.

This tectonic shift of technology over the course of time has sent tremors through university campuses, but Florida States University’s English department has adapted as the times have changed.

FSU has always kept up with the times: “It’s not like we were in the dark ages,” FSU’s Director of Rhetoric and Composition and Professor Kristie Fleckenstein says.

Look back at the technology of the past few decades: cellphones and desktop computers were bricks; laptops weren’t a necessity; tablets weren’t even an idea; the internet ran at tortoise-speed thanks to dial-up connections; and email was only just gaining prominence as a form of communication. Today, cell phones are now mini-computers with high speed internet that we use for email and instant messaging. Desktops are sleeker, laptops and tablets are used by many, and classrooms are now tech-friendly, featuring tools such as SMART Boards.

There have been plenty of different types of technology available at FSU over the past 20 years, as Fleckenstein mentioned. Desktop computers, projectors, email, and online course sites have all been at the disposal of students and professors.

Despite the variety of technology, 2009 served as a critical year for the department in the technological evolution, as it marked the creation of the English major’s third track: Editing, Writing, and Media (EWM).

The EWM program brought a wave of change, as its goal was “writing for the 21st century.” This focus required the department infrastructure to undergo some upgrades in order to accommodate the new program.

Previously, in 2007, a grant had been proposed that would renovate a small conference room into the department’s first Digital Studio. The space featured computers that are networked in pairs to facilitate a collaborative workspace and a SMART Board, which was the first of its kind to be implemented into the department.

This inspired Fleckenstein to propose a grant in 2009 that would renovate a traditional classroom—with the teacher at the front of the room and standard desks—into a “laptop ready classroom,” featuring plugs for laptop chargers, moveable desks, and multiple screens for the simultaneous display of different images and text. This rich technological environment would also feature its own Wi-Fi hub, so that students working on digital projects would have sufficient Wi-Fi strength to do the kind of complex activities they needed to do, such as designing a website or working on large images with Photoshop.

“We, as a department, were thinking of ways to renovate the classrooms so that they would be more congruent with the nature of the courses—the curricular goals—for EWM,” Fleckenstein says.

With digital projects a key element of the EWM major, promoting areas to work on these projects became a necessity. Having SMART Boards to showcase examples of these projects to students assisted in creating a new-age learning environment. 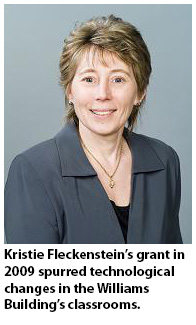 These implementations were actually considered “test-runs” at the time. Once they were found to be successful, along with an increased popularity in the EWM track, more updates became necessary.

Fleckenstein proposed a technology fee grant for renovations to three rooms in the Williams Building. This included placing SMART Boards in two rooms, as well as data projectors and an Egan Board (another type of digital marker board) as well as two SMART Board in a third room. The Egan Board was a novel addition.

Key byproducts that the technological shift has promoted are flexibility and interactivity. As a result, professors have needed to become more adaptable.

Faculty and graduate students who would be teaching in those spaces took training sessions so they could get accustomed to the new technology. Fleckenstein says the change was a little jarring for those who weren’t as attuned to technology, but in the end, the adjustment went smoothly. 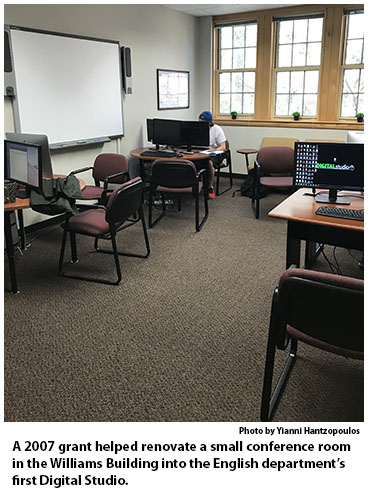 Someone who embraced the change was Stuckey-French, who has been happy to adapt to new technologies in the classroom, like SMART Boards. This was a specifically welcome upgrade, as he believes “the overhead [projector] is a dinosaur.” Stuckey-French can’t recall the last time he used a projector over a SMART Board.

Stuckey-French is no stranger to changes, as they came quickly after he arrived at FSU in 1999. When he started teaching at FSU, desktops were common in offices and classrooms. Despite this, they were short lived in offices. A switch to laptops came within a few years of his arrival.

“We switched when [desktops] became outdated and couldn’t handle the day-to-day chores you needed it for, when we were starting to go just beyond email, things like that,” Stuckey-French says. “You wanted to be able to download a video.”

Since this switch, the English Department has issued three or four laptops to Stuckey-French. A laptop upgrade usually occurs every three to four years, as professors need something new in terms of hardware to keep up with the programs being used in classrooms.

Once desktops couldn’t handle the demand of the classroom, the use of laptops meant that a new technology became popular: the dongle. While the term “dongle” is somewhat ambiguous, the ones used at the time were double-sided USB cable that connected two devices to one another. These adapters were common among professors, who were better off using their laptops and a dongle over a desktop computer if they wanted to show students something like a video clip in class.

While the department wasn’t technologically deprived 20 years ago, some of the technology was underutilized. Email, for example, was hardly used. As Stuckey-French recalls, he used to put his email on his syllabus and the majority of students would never use it to contact him.

“You weren’t taking your work home with you; you weren’t making that move to 24/7,” Stuckey-French says. “Basically, that’s what we are now. We’re on call.” 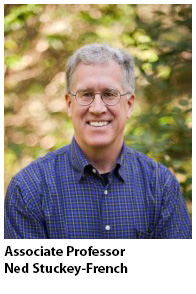 This is due to the introduction of learning management systems such as Blackboard and Canvas. Those systems facilitated more interactions with students, and putting assignments online requires email communication.

Stuckey-French, naturally, believes that the shift in technology has been for the best. Current students would agree, as most would break down in tears imagining what it would be like to not have the technologies currently at their fingertips.

“It would be very different. Can’t say it wouldn’t be a challenge,” says Sarah Kalis, a senior and EWM major at FSU. “But as an English major, in terms of writing, I feel as though it would allow us as students to get back to the basics without all of those distractions. But I’m thankful we have the technology we do.”

All these technologies have become the norm of teaching in the digital age. Over the last five years, not much has changed besides some software updates. But these current technologies, like SMART Boards, could be hit by a meteor of change sooner rather than later.

“I don’t know what’s next but I look forward to it,” Stuckey-French says, having worked in the department through the transition from ancient iMacs to Macbook Pros and white boards to SMART Boards

Just as the dinosaurs evolved into birds, the birds that are today’s technology will absolutely evolve and adapt to whatever the future holds.