The Society for Critical Exchange is relocating this year’s annual Winter Theory Institute conference from the organization’s home base in Victoria, Texas, to Tallahassee, Florida, specifically the Department of English at Florida State University. As co-hosts, SCE and the Literature-Media-Culture program of the English department say that even though the conference site is different, the event’s atmosphere will be the same: intense. 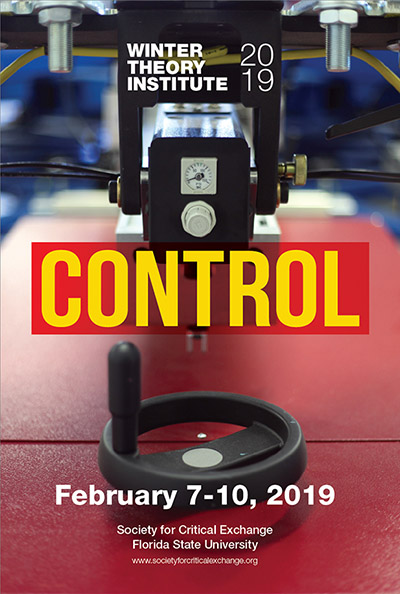 Exploring the theme of “Control,” 14 scholars from the U.S. and Europe are scheduled to present their ideas and perspectives on the topic. The conference begins February 7 with a reception, followed by two days of discussions.

“The aim of the WTI is always the same regardless of the theme: to explore a topic of theoretical interest and impact closely over the course of three days through formal presentations and informal conversations,” says Jeffrey Di Leo, dean of arts and sciences at the University of Houston-Victoria. “It is a very intense event and a very rewarding one for those who participate. There is really nothing like it in the United States.”

Di Leo has been SCE’s executive director for 10 years, the same span of time the WTI conference has existed.

“Each year always results in some unexpected and rewarding take away,” he says. “With so many different points of entry regarding control on the table, I’m sure that this year will be no different.”

English Professors Aaron Jaffe and Robin Goodman are the FSU co-hosts for the conference and both have attended WTI conferences in the past. They each echo Di Leo’s description of the environment for the discussions.

“The WTI is amazing but intense, a real exercise in trans-disciplinarity,” says Jaffe, who attended once in Philadelphia and once in Victoria. “The topics and speakers always cut across numerous fields and approaches, but the topic brings them together. A lot of the research in disciplines of the humanities begins with smart talk, dialogue, and exchange, which leads to more things, connections, dialogue, exchanges—and eventually lectures, books, courses, and big ideas.”

Goodman attended conferences twice in Victoria, in different years than when Jaffe attended. She says the intensity comes from the conference set-up.

“Usually at other conferences, attendees can walk around and sit in on different seminars that are held at the same time,” she says. “This is two days of spending time with everyone and hearing their presentations. This feels more like a community—you get to know the people and their scholarship better.”

This conference is SCE’s only stand-alone, multiday event, Di Leo says, and he was pleased to work with Jaffe and Goodman when they pitched the idea of FSU hosting the event.

“Things worked out logistically very well for the SCE doing the conference at FSU so we went forward with it,” he says. “One of the attractive things of doing the WTI at FSU is the strong and active theory community at the university.”

Jaffe developed the titled theme of the conference, Control, although he points to Williams S. Burroughs’ idea of a “control society” as inspiration. Before Burroughs, he says, the concept was also central to ideas of the polymath American mathematician and philosopher Norbert Weiner, who wrote Cybernetics: Or Control and Communication in the Animal and the Machine (1948) and Human Use of Human Beings (1950). These pioneering books, which discuss control in terms of information, intelligence, entropy and feedback, were the intellectual cross-over hits of their time. Goodman adds that control is an important topic not only for media theory but also for political theory, especially in relation to neoliberalism, market fundamentalisms, growing authoritarian politics and precarity.

“The idea was that society was developing new ways of channeling people into various systems of control, especially through new tech and codes, what he thought of the language machine,” Jaffe says. “The influential French thinker Gilles Deleuze borrowed from this in a famously prescient essay from 1992 called ‘Postscript on the Societies of Control,’ and also from Burroughs's ideas that we should think about new tactics for scrambling these systems.”

Jaffe adds that English Professor Stan Gontarski and recent English Ph.D. graduate and instructor of English Blake Stricklin have “blazed a trail into some of the surprising connections between Burroughs, the Strozier Library, and this part of Florida.”

“Deleuze thought that ‘surfing’ would be one way to think about how people move through information, including art, literature, media, culture,” Jaffe says. “One hope is that this conference will provide surprising intellectual exchanges and connections for the participants and auditors—lessons in ways to surf the increasingly complex flow of subjects of study, where drop-in points for meaningful analysis and criticism are getting harder and harder to find and navigate.”

The conference, Goodman says, “should be able to begin a dialogue about the relationship between the kinds of control that arise because of new media, on the one hand, and, on the other, the kinds of control we see on the southern border, for example, or in schools with metal detectors and standardized tests.”

Jaffe, Goodman, and Gontarski are all presenters at the conference, which schedules seven presentations each day. Gontarski’s presentation title is “Cut-ups, Pick-ups and the ‘Limits of Control’: Burroughs to Deleuze.” Jaffe’s is “Remote Control” and examines the ways ideas about “control exercised on people or institutions at a distance” figure into the writings about intelligence by Rene Descartes, Joseph Conrad, Nikola Tesla, and Robert Heinlein.

Goodman will discuss the 2012 documentary The Act of Killing in her presentation titled “Mimesis Unto Death.”

The film addresses the Indonesian mass killings of 1965-66, when an estimate of up to three million people were murdered under the pretext that they were communists. The perpetrators are interviewed in the present day. Goodman makes links from the time of the killings to the authoritarian regimes of today, she says.

Attendees for entire two-day conference will include scholars from other FSU departments, including religion, modern languages, and English education, among others.

“We’re fortunate at FSU English,” Jaffe says. “We have so many excellent professors and many productive areas of overlapping research interests. Still, often the people you want to talk to are not down the hall but dispersed everywhere. Robin Goodman and I were fortunate to be able to bring together so many smart people and bring this vital project to Tallahassee.”