When Jeremy Willis graduated from Florida State University in 2004 he pursued a career that combined two of his passions: creative writing and sports reporting.

With degrees in English and in Sports Management, Willis is now doing what many students would consider a dream job: Willis is the senior trending editor for ESPN, the “Worldwide Leader in Sports.” 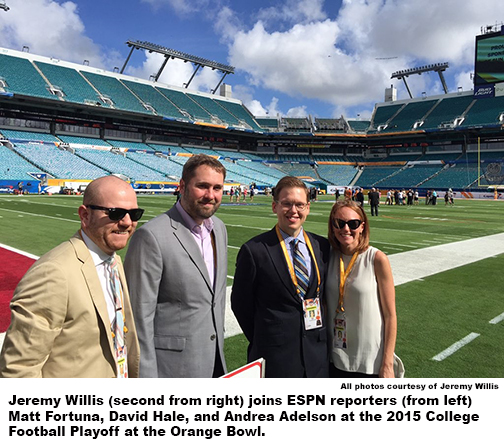 Even though Willis started out in college on a fiction writing path, he had always been an avid reader of newspapers, websites, and sports news outlets, eventually leading him to a focus on journalism.

“I had a professor who taught several different creative nonfiction classes, and the way that he taught us to write and read really opened my eyes to how the real world and real stories can be so vibrant,” Willis says. “I had never looked at nonfiction or journalism before that as such a rich environment to capture. Nonfiction writing can be just as creatively challenging as fiction.”

Throughout his time at Florida State, Willis worked as a sports editor for the FSView & Florida Flambeau, giving him a good basis of sports journalism that he would use in his career. He also worked as an equipment manager for the FSU football team. (Read his personal essay about that experience.)

Now, after 16 years at ESPN since taking these creative nonfiction classes at FSU, Willis has learned valuable skills from sports journalism. He has published mobile, video, and traditional editorial work, as well as covered high school sports, college sports, and the NFL. At present, Willis handles all of ESPN’s live event coverage and trending culture news.

Moving to Connecticut shortly after graduation with his wife, who also works with ESPN, was a significant change in weather and entertainment, coming from central Florida. Willis says that there is not much to do in Bristol, with the exception of the ESPN headquarters.

He recently met via Zoom with FSU undergraduates to give them tips on job search strategies, industry trends, and networking. The Feb. 24, 2021 Career Center event was part of its ProfessioNole Mentors Chat series.

In his current role with ESPN, he works with editorial partners and leads his own staff of seven editors. The group functions as a piece of the larger team that programs the website that handles their 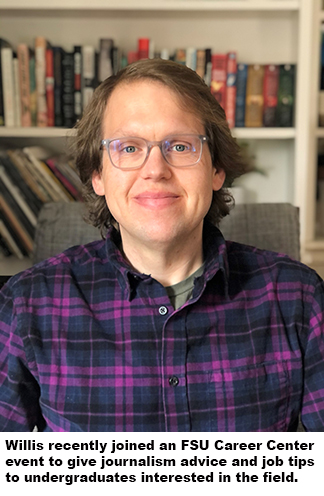 alerts and platform content. That information then posts elsewhere, with Google, Apple, or their newsletter, among other places.

Willis finds it difficult to describe his typical day at the office, however, as he says there is nothing “typical” in his job at ESPN.

“In a sport that is regimented by a season, your day can go sideways, in a lot of ways, very quickly,” Willis says. “No two days are the same in this job. When I was in other jobs, it was a little bit easier to plan out your week, like if you were covering the NFL and knew that teams had certain days off. But now, things are crazy on all days, not just Sundays.”

Not only are weeks difficult to plan for in Willis’s field, but he must also plan for full sports seasons, despite most of it being hypotheticals or “what ifs.”

For example, the National Football League and college football begin planning for the playoffs, the Super Bowl, and the national championship game six weeks to two months in advance. Therefore, planning for so many unknowns requires a lot of effort, sometimes all for nothing once a particular team is out of the running.

During Willis’s first year covering the NFL, a reporter that he worked with had a team that went to the Super Bowl and he felt extremely lucky.

“I felt so good,” Willis says, recalling the situation with enthusiasm. “By the time we got to the Super Bowl, we were buttoned up.”

Willis and his team had planning sessions well before Super Bowl week and the game, which reaches a global audience.

“We were able to just sit back and let all the crazy stuff that happens around the game happen,” he says. “All the big stuff had already been planned, written, and edited and it was ready to go. So, we weren't trying to do that while trying to handle all the wild stuff that happens when you're in the week of the game itself.”

Willis knows how valuable his willingness to adapt is in his high-stakes and quickly changing job path.

“The advice that I give to a lot of young students and even colleagues is to be curious and be flexible,” Willis explains. “When I came to ESPN, I really wanted to be a college football editor and that was several jobs ago for me. I needed to be able to be flexible and move around.” 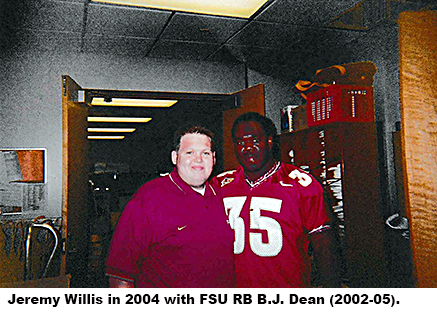 Despite being immersed in world full of sports and statistics that constantly shifts his focus from one story to another, Willis still keeps up with the “E” of his company – entertainment – and pop culture.

“I feel like Taylor Swift has nothing on me because she had two albums during a pandemic, but I had three jobs,” he says, laughing at the reference. “I owe my sanity to my ability to just be flexible and nimble.”

Willis says he is thankful for the opportunities he has at ESPN, and he encourages English students who have the interest to find journalistic work, even if it isn’t at a big company like ESPN or The New York Times. With more experience comes a better understanding of how to write questions, set up an interview, get the answers you want out of the subject, he says. The more you write and edit, he adds, the better your craft will be.

“We're great, creative people, and we're storytellers,” he says, speaking about English majors, adding a warning. “If you can't tell a story, and if you can't read and write creatively and critically, then you're at a disadvantage.

“The best thing that I learned through Florida State's English department was how to read critically and how to tell a story to communicate with readers.”