The single source of light in John Ribó’s office is a soft but warm lamp, and the ambiance in the room foreshadows his outlook on both learning and teaching.

Ribó, assistant professor in the English department at Florida State University, has academic interests in Latinx, Caribbean, queer, border, cultural, and critical race studies that stem from personal experience, curiosity itself, and a love of literature, music, and film. He takes these interests and helps students explore them in class, around campus, and across Tallahassee, sharing an active and inquisitive approach to teaching. 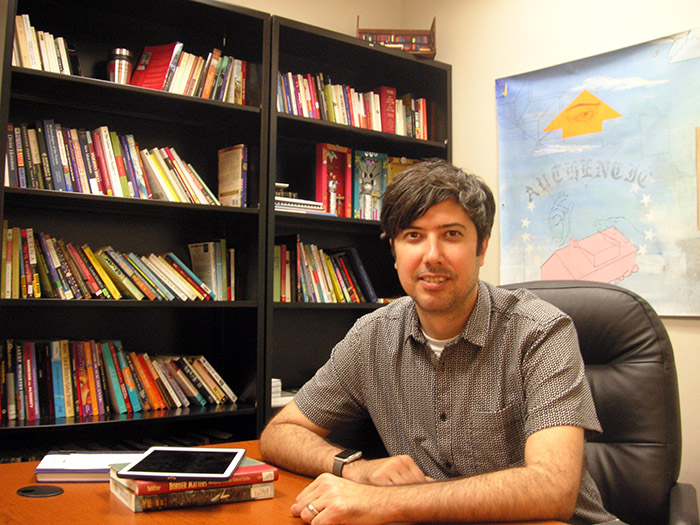 “I certainly am invested in fostering an inclusive environment for all FSU students no matter where they come from, what they look like, who they love, where they worship, or how they are embodied,” Ribó says. “I also am convinced to the core of my being that I can learn a lot from my students and young people in general.”

The adjustment from the bright fluorescence outside of Williams 442 to the subtle yellow wash of Ribó’s interior office can be daunting at first, but the environment quickly becomes inviting and entrancing. Ribó’s varying interests and willingness to share them become apparent upon surveying the large and colorful artwork occupying the majority of the wall space behind his desk, the large bookcases full of fiction and theoretical works, and a spread-out collection of other quirky, colorful and eye-catching pieces.

Without hesitation, he closes his laptop and begins explaining to his visitor his view of academia. He illustrates how his career and personal goals both align with his current teaching philosophies and expand far beyond them.

Ribó believes he can learn alongside his students and that young people are leading the way on numerous fronts, with movements such as Black Lives Matter, the Women’s March, and the March for Our Lives.

As such, being involved with the community is important to Ribó. He put it simply­­—and yet not at all.

“There is a part of me that bucks at any injustice I see in the world,” he says. “I want less racist communities, I want less anti-blackness, I want Latinx Caribbean communities to have representation.”

Therefore, Ribó wants to work toward not only more recognition of Critical Race studies but a Latinx studies program at FSU. He notes that the demographics of Florida, and the nation, are changing. One in four people in the state of Florida is Hispanic.

“It is preeminent that a school like FSU provide the space that I had at [the University of North Carolina], to contribute to the state and to show [all] students that they are a part of American studies,” he says. “I think it is important for FSU to think of what the future of Florida will likely look like, and what Humanities should look like too.”

In mid-June 2018, the Florida Education Fund (FEF) awarded Ribó a McKnight Junior Development Fellowship, which not only acknowledges his work to this point but could help him in his future efforts. The fellowship promotes excellence in teaching and research by underrepresented minorities and women, and offers a one-year sabbatical for the award winner.

Ribó’s upbringing in Dallas was the first inspiration for creating more diverse and inclusive spaces inside and outside of university settings. A predominately Chicano culture surrounded Ribó, but with a Cuban-American father and a Dominican-American mother, he was “separated from the Cuban and Dominican diasporas.”

As an undergraduate at the University of Texas at Austin, Ribó could not find his niche due to the predominance of Chicano studies, but he still found the experience inspirational and influential.

“It was a great excuse to read, not only for aesthetic pleasure but for the aspects of the topics themselves—I never wanted to leave,” he says.

Rather, he obtained his masters and doctorate from UNC-Chapel Hill, where he was able to truly explore his identity and its representation in the arts.

What Ribó discovered is that he is a proud and self-proclaimed nerd. He is aware of the negative connotation the term often has, but by enjoying so much his place in the world of academia, he has come to embrace it.

“I guess my tendency to use the word ‘nerd’ really dates me,” Ribó says. “Growing up in the 1980s, I loved comic books, video games, and sci-fi. In the John Hughes films of the era, I fit the stereotype of a nerd.

“At university, all of a sudden the things that made me a nerd—that had formerly made me the butt of some people’s jokes—instead made me successful and, in my own way, powerful. I’ve proudly identified as a nerd ever since.”

As such, he stayed in the world of higher education, a decision that brought him to FSU in 2015.

“I met my mentor who validated me to see that we exist, and our experiences are worthy of academic scrutiny, she gave me direction in my scholarly experience,” he says.

This mentor is María DeGuzmán, a pioneer for Latina/o studies in the Southeast, and especially at Chapel Hill. Being DeGuzmán’s graduate assistant exposed Ribó to the burgeoning field of Latinx studies.

Ribó often looks up while he thinks of how to express himself, outstretching his hands to make staccato movements that emphasize the passion behind his words. He does so when explaining how his studies at Chapel Hill influence his current efforts with FSU’s English department, saying he is an advocate for “having faculty that validate students’ experiences or interests.”

The classes he teaches reflect this focus, with titles such as Latina/o Studies on Trial and American Multi-Ethnic Literature: Apocalypse and Utopia in Multi-Ethnic Genre Fiction. He wants students to see themselves in art and literature, as he explores toxic masculinity and Dominican colorism with Junot Diaz’s The Brief Wondrous Life of Oscar Wao or addresses historically significant ideas and issues surrounding the LGBTQ+ and Latinx communities with John Rechy’s City of Night.

As a Dominican American, Ribó says he sees aspects of his own upbringing when reading The Brief Wondrous Life of Oscar Wao, explaining how the character Beli is like his grandma or mom.

He does not withhold personal connections to literature from his students in class. Instead, he readily shares them. Doing so helps him to achieve the goal he has for teaching undergrads.

By giving a little bit of himself in class, Ribó gains a lot. He is able to “flip the switch” for his students and help inspire crucial questions the course literature and film material raises for them.

A former student, Danielle Reedy, says Ribó’s flipped approach made him the best professor she has had.

“It was refreshing to have someone who shares my ethnicity to be able to teach me elements of my culture that I otherwise may not have had access to,” Reedy says. “Aside from the careful attention he paid to the topics we discussed, the structure of his class allowed me to flourish personally and feel challenged and stimulated. He cares about learning and understanding over a score.”

Though he admits his goals differ a bit for teaching graduate students, his goal with undergraduates is to help them understand that they have a voice.

“It is important to teach them to look with critical lenses and apply it to their focus,” he says. “I have students who will be doctors and lawyers, who need to be able to articulate what’s important to them.”

Lindsay Hughes took two classes with Ribó, and she graduated in May 2018 with a dual degree in Media and Communications Studies and Spanish. She says his classes always taught “new and different ways to think about things that would never occur to me as a non-person of color…[creating] a learning environment in which students can learn without feeling ignorant.”

Hughes also says that she can see herself applying what she learned in Ribó’s classes “simply in the way that I carry myself through my career and how I interact with people.”

Ribó continues to encourage those feelings in his classes. He recently taught Moonlight, FSU alumnus Barry Jenkins’ Oscar-winning film that addresses queer and racial themes and is set in South Florida. Numerous FSU students are from South Florida, and they might be struggling with the issues presented in the film. Ribó says he loves giving his students “the feeling that someone has come before them and has been there and can be successful too.”

Ribó is a passionate professor of color who often finds himself contemplating demographic changes and the realities of how those changes affect humanities departments for his students. As such, he has realized that he tends to have more students of color than the average professor does. He addresses this tendency in a broader sense, saying “it behooves [FSU] to look where the students are going and why.”

Chelsi Chang, who took Intro to Latinx Literature in English with Ribó in Fall of 2017, echoes Ribó’s sentiment, saying as a person of color she has at times felt isolated in English literature classes. Ribó became somewhat of a mentor to Chang, exposing her to writers who related to her and her identity. She recently met with him to discuss going to graduate school for a master’s in public administration.

“As a first generation, it was nice to have someone to walk me through the process,” Chang says. “I could tell he truly cared for me and [my] future. I look to him as somewhat of a mentor and the things he exposed me to really put me on the path for a governmental job.”

Ribó says teaching and mentoring, especially to so many students of color at a predominately white institution, is “amazing. It is a privilege.”

He regularly shows his compassionate and alternative teaching ways, even in small acts. As the discussion ends and he prepares to leave for his morning class, he asks his visitor, “But how are you?”

Gaby Paez is a senior English major, with a concentration in editing, writing, and media.