Florida State University alumna Kim MacQueen has lived her life unafraid to accept the challenge of branching out into new territories. She is a South Florida native, originally from Ft. Lauderdale, but MacQueen has moved around the country to pursue new experiences.

Her next venture, though, requires her to take a trip into her past, when she worked with the Florida Flambeau, an independent newspaper that published for 83 years in Tallahassee. 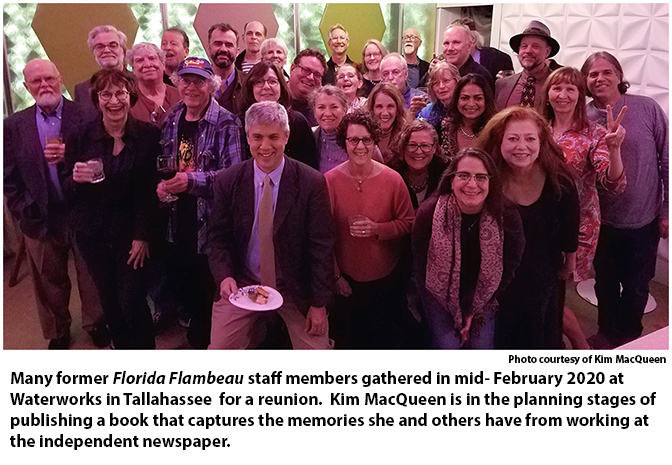 “I have never worked anywhere else that was even remotely like it, that taught me so much. That’s where I learned to be an adult smart person,” says MacQueen, referring to her time there in the late 1980s and early 1990s. “I remember exactly where I was sitting at the Flambeau when I learned what apartheid really was, and it wasn’t like someone was lecturing to me.”

She was reading through past issues of the newspaper to research what a guest speaker on campus was going to talk about regarding South Africa’s discriminatory policies at the time.

“I knew you had to free Nelson Mandela but, for a long time, I didn’t really understand why,” she says. “It’s so embarrassing to say that now, but it’s illustrative of how important this organization was to me.”

MacQueen and other individuals she worked with at the Flambeau attribute their success to the formative experiences they gained working with the publication. She even met her husband of 30 years at the Flambeau, and their wedding party was partially composed of friends from the newspaper.

To document the importance of those experiences, MacQueen and a few of her colleagues from the newspaper have agreed to collaborate on finding a way to memorialize that period of time working for the publication.

“The idea is to capture memories and oral history of the period of time that the Florida Flambeau was truly independent,” says MacQueen, who has gained experience with the process through self publishing two novels. “We want to capture the spirit of what it was like to work there and the effect it’s had on our lives.”

The idea is to capture memories and oral history of the period of time that the Florida Flambeau was truly independent. We want to capture the spirit of what it was like to work there and the effect it’s had on our lives.—Kim MacQueen

While still in the opening stages, MacQueen continues to research the Flambeau’s history, including collaborating with her former colleagues during reunions in 2010 and 2020.

MacQueen’s personal history in Tallahassee begin in 1984, when she moved to the city to attend FSU after graduating from Jupiter High School. She earned an English degree with an emphasis in creative writing, and 10 years after she graduated, she moved to New York with her husband, Steve. Then the couple began a whirlwind of moving every three to five years.

“I don’t recommend it, but I think he thought it was fun,” says MacQueen, chuckling. “I’m kidding, I was fully into it. We moved all over the place, from Tallahassee to New York to Atlanta to North Carolina and from North Carolina back to Tallahassee for five years, and then Vermont.”

Now settled in Vermont, MacQueen works as managing editor of the Center for Publishing at Champlain College. Along with her responsibility for almost all student media at Champlain, she teaches several classes, usually during the fall semesters.

She and Steve and their family return often to Tallahassee for a visit, as many of their loved ones and friends still live in the city.

Through the foundation laid by her time at the Florida Flambeau, MacQueen has built a love for the writing industry over the years. She has juggled several independent publishing projects while teaching and working as a writer and editor, and earning an MFA in Creative Nonfiction from Bay Path University in Longmeadow, Massachusetts.

More recently, she has turned her focus to food and wine writing. This new career, she says, is “still very much being born.” 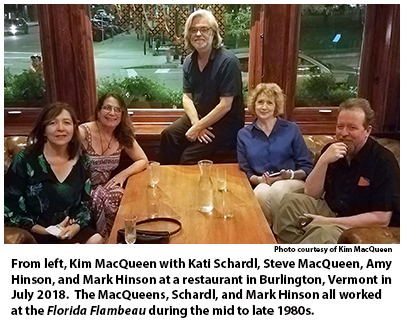 “I have been on a fun journey the last couple of months where I try to learn a lot about my own Italian-American culture, specifically the food and wine aspect,” MacQueen says. “I took the Court of Master Sommeliers introductory course and started moonlighting in a wine bar here in Vermont.”

At the time, she says, she wasn’t exactly sure what to do with her burgeoning interest in food and wine. Then she says she found herself writing a combination essay collection/cookbook.

“I’ve learned that you can really learn a lot by the way friends introduce you,” MacQueen says. “When I was working at the wine bar, I couldn’t have really told you why I was there. I was just kind of following my interests. My friend Hannah, who was training me, was trying to figure out how to introduce me to some of the other servers at the bar. Finally she said, ‘Kim is working to move writing about food and wine more into the center of her every day,’ and I thought, ‘That’s exactly it!’”

Although she has ideas for an independent press project, MacQueen says, “I think it’s smart for me to hold off announcing things until they are fully baked. I have a couple of different pies in the oven and none of them have names yet.”

MacQueen admits she has always been interested in publishing. She self-published her two novels in the early 2010s, and soon began helping first-time authors get their books on shelves.

“Whenever I had time off, or nights and weekends, that’s always the direction I was going in,” MacQueen says. “I learned to be a publisher along the way. By the time I really took this seriously I had a couple of credits to my name and it was just a matter of ‘Oh, I guess this is a thing I like to do,’ and ‘Oh, if I was smart I might be able to cover my expenses the next time I do this.’ I was ready for the next challenge.”

MacQueen has been spending her time during COVID-19 pandemic working on her next book, which she hopes to have out by the 2020 holiday season.

“I’m either doing that or doing something else and feeling badly because I really need to be doing that,” she says.

Even as MacQueen discusses the other projects she is beginning, though, she eventually returns to her excitement for reconnecting with the place that started everything for her, the Florida Flambeau.

“I’m really looking forward to jumping back into my own and the Flambeau’s history,” she says, “and reconnecting with all of my friends around that and helping to bring to light just how important and influential these people have been to me.”

Rebecca McCandless is a junior majoring in English on the creative writing track, with a minor in communication. She is currently a writing intern for the College of Arts and Sciences.