Florida State University alumna Janecia Britt used her networking abilities to find her current job at her alma mater. In June 2021, Britt began her position of assistant director of communications for the Alumni Association, and she is also the editor in chief for Vires, the association’s official publication. 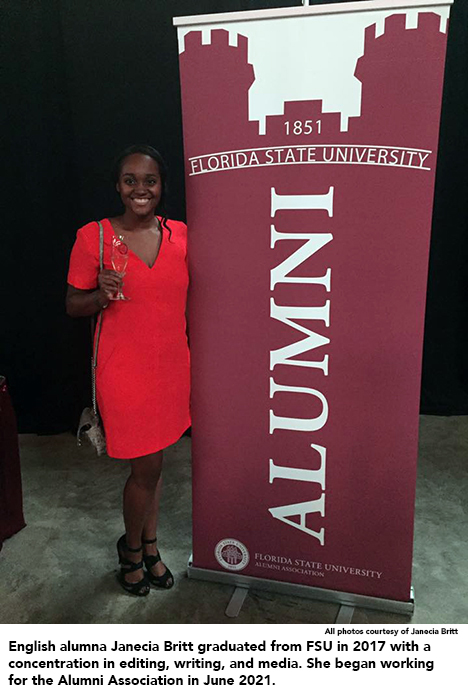 Britt’s undergraduate career began almost a decade ago after she applied to several schools in Florida. Although she never took an official tour at FSU, Britt visited a friend from high school, who was a Seminole at the time.

“She took me on a campus tour,” Britt explains. “It is a cliché saying, but when I toured FSU with her, everyone talked about how great I could be at FSU, and they told me how I could get involved. Everyone was both welcoming and kind.

“I did not mind where I would attend college as I was always under the impression that I would be happy anywhere I went.”

Now working for FSU, her role for the association was quite unexpected as she admits that she was not sure if she was going to stay in Tallahassee before she received the job offer. Even as an undergraduate student, Britt encountered several experiences where she would discover what her life would be like post-graduation.

Little did she know, the opportunity at the Alumni Association would become an option for her.

“The whole experience of being back at FSU is unbelievably special," she says. "I feel more connected and purposeful in the mission of what I do.”

Britt first brought her academic talents from Central Florida to Tallahassee in the summer of 2012, when she embarked on her journey as a Seminole through FSU’s CARE Summer Bridge Program. She originally was an English major on the editing, writing, and media track. Britt also had an interest in fashion, though, so she changed her major to retail merchandising for a few years.

“It was a great major where I was exposed to several opportunities in the fashion industry,” Britt says. “During this time, I interned at a program called Dream Careers that I found on campus. I also did a fashion internship in New York City, where I realized this major was not a good fit for me personally.”

While in New York City, Britt attended a student publication conference for Her Campus, which has an FSU chapter.

Britt said she remembered how her entire childhood was spent reading, and she had a series of great English teachers throughout her education, specifically in high school. With the change back to an English major, she returned to her writing roots.

As an avid writer, Britt earned a position for Her Campus FSU. But she soon had the opportunity to start a new publication on campus, called Spoon University.

“My role for the organization was as an editorial director, but I also worked in conjunction with the media director and the community director,” Britt says. “The three of us built and ran the chapter for about two years.” 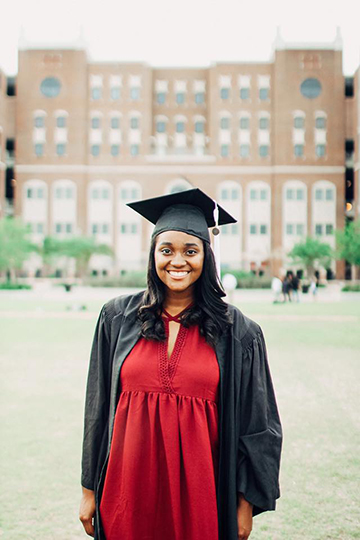 Toward the end of her undergraduate career, Britt turned to the English department for guidance and found ways to stay involved at FSU.

“I was a tutor in the Reading and Writing Center, which allowed me to recognize that I wanted to become an editor,” she says “That position allowed me to have an eye for editing, and I was able to tell students how to better their work.”

With her experiences throughout her undergraduate career and with the help of her English department mentors, Britt learned how to be a better editor.

When she graduated from FSU in 2017, she moved home and worked at a call center for several months.

“Surprisingly enough, you would not think that job was that important,” Britt points out.

Not only did her time at the call center teach her how to communicate with others and improve her interviewing skills, the work also enhanced her editorial skills.

“I learned how to ask the important questions such as ‘what is the point of the story’ or ‘was I asking the right questions to get the content that I wanted,’” she says.

In her post-graduate life, she kept in contact with the English department through participation on panels hosted by FSU’s Society for Collegiate Journalists, which led to her maintaining contact with students and becoming a mentor for them.

Once Britt left the call center, she had other jobs in the Tallahassee community, such as digital editor from January 2018 through December 2019 for Rowland Publishing and digital marketing coordinator from December 2019 through June 2021 for a tech-software company.

Britt says working at the Alumni Association has been an eye-opening experience. She now realizes how much storytelling and story building the university does.

“We are not just working to make a product, but we are showing how the product is Florida State University,” she says. 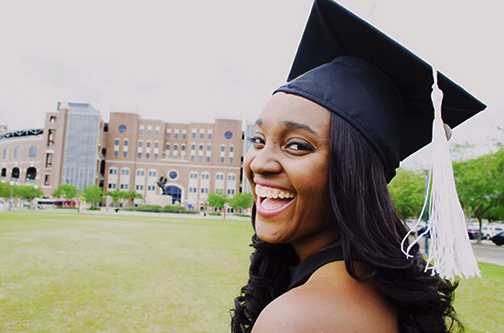 FSU’s legacy inspires Britt to focus on the nostalgia factor throughout the magazine. For the future, as editor in chief for Vires, Britt not only wants to highlight where FSU is going but also where FSU has been.

In addition, Britt hopes to bring the association into a more digital-focused environment where alumni can interact with one another and share their stories about FSU.

“The alumni association is doing a great job of bringing alumni into the 21st century,” says Britt, while acknowledging her own hopeful ambitions. “We hope to create new and innovative ideas to reconnect our alumni with Florida State.”

Fewer than 10 years ago, Britt was a first-year student at FSU who never imagined she would end up in higher education as her career path. Yet, today, her role at the Alumni Association is one that brings Britt full circle.