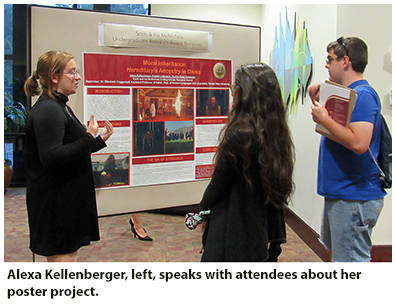 The Office of the President and the Center for Undergraduate Research and Academic Engagement sponsors the President’s Showcase. The annual event allows the award winners of the IDEA Grant summer research experience to share their research with the university. The IDEA Grants are part of the larger commitment at FSU to the academic success of undergraduates across all academic departments at FSU.

As part of the Undergraduate Research Opportunity Program (UROP), working alongside Modern Languages and Linguistics Assistant Professor Elizabeth Coggeshall, Kellenberger helped to track an archive called Dante Today, which compiles outside contemporary references to Dante within the archive. Kellenberger says she was stunned by the number of horror movies that continued to come up in the archive, but she found some surprising similarities when she began to conduct her own research.

Though Kellenberger completed her research through the Department of Modern Languages and Linguistics, she says her English background helped her prepare for the project. As she tracks themes through horror movies and the texts of Dante, Kellenberger relies on her skills of literary criticism and text analysis developed through her English classes. Furthermore, her experience with the concepts of literary genre helped her in understanding the layout of Hereditary.

The beginning of the film seems to have themes set like a Greek tragedy, Kellenberger points out, on the inevitability of fate and the horror of grief. But as the film continue, the story begins to spiral into the idea of inherited sin, passed from parent to child. Kellenberger argues that instead of the characters being victim of an inherited sin or tragic family fate, the characters instead made choices that led to tragedy. This matches a Dantesque motif of “No penitents,” in which characters never take responsibility for their actions, and never repent for their sins, leading them to never recover from their experiences, she says.

Kellenberger used a poster board to explain the project to visitors at her display. In addition to an English major, she plans to pursue a double major in Italian Language and Russian Language. In addition to those academic interests Kellenberger is passionate about film and literary studies, with a focus on the horror genre, which steered the direction of her IDEA Grant project.

Emily Voytecek is a junior majoring in English on the editing, writing, and media track, with a minor in information technology