The teaching and learning communities are flooded with various types of comics, graphic novels, and textbook images being used to enhance readers’ understanding of a text. Florida State University graduate student Aaron Rodriguez knows that blind and visually impaired individuals are at a disadvantage when it comes to enjoying these multi-modal texts. 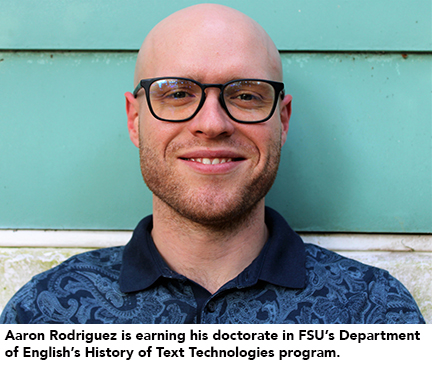 That’s why Rodriguez is developing a way for BVI readers to access those comics: the Vizling App.

Even with audio books or braille, certain people are missing out on identifying page layout, reading at their own pace, and understanding panel composition. Rodriguez is the co-founder of Vizling, which was first imagined when he encountered a visually impaired student while teaching a literature course.

“At this same time, I was also starting to develop an interest in technology, and I realized that I could learn more about technologies to help support this student,” explains Rodriguez, who is earning his doctorate in FSU’s Department of English’s History of Text Technologies program.

Speaking with the student, Rodriguez realized that individual panels in comics function similarly to sentence-level grammar and paragraph grammar and that his student was missing out on these key formatting concepts. However, it was difficult getting an accessible, equitable version of that comic for his student.

“Then, while pursuing my masters with my professor, Dr. Darren DeFrain, at Wichita State, we started talking about how we might make that kind of comic accessible and one thing led to another: we developed Vizling,” Rodriguez says.

The first mode is an audio version where the words from the page will be read aloud to the reader.

The second mode focuses primarily on the comic panels as a sequence. This haptic reading experience was developed using Unity 2D, a game software engineering program. Unity is the world's most popular 2D and 3D game creation platform with 50 percent of all mobile games being made with it, according to the Unity website.

When the reader drags their finger across the page, the program explains what action is happening in each panel, and as they cross into a new panel, readers will receive a haptic response, similar to the vibrations on your iPhone, iPad, or whatever type of technology is supporting the app. These haptic responses will either be a negative one (when the user enters the incorrect panel) or a positive one when entering the correct panel.

The third mode is referred to as “free exploration mode,” allowing readers to press anywhere on the page and be told what is present. All objects are assigned a coordinate on the screen, so when pressed, the program will tell the reader what they have their finger on.

Rodriguez employs the lessons he is learning in his doctoral studies to better help the blind and visually impaired. Through his courses at FSU, such as Visual Rhetoric and History of Text Technologies, Rodriguez is able to understand the importance of layouts and panels in comics, rather than just the words.

Before attending FSU, Rodriguez did not view a book as a material object but rather just a container for information; he did not appreciate the container itself.

“I feel like, in a lot of ways, getting my Ph.D. at FSU is filling in a lot of gaps,” he says. “I have always loved comics and visual culture and FSU has a terrific Rhetoric and Composition Program that helps to nurture that.” 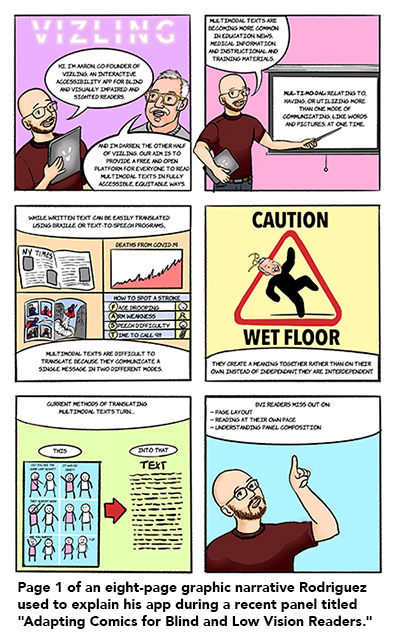 With his expanded knowledge base, Rodriguez can spread his commitment to his cause effectively and call upon other educators to help support BVI students.

“I think as teachers and educators we need to be giving our students the best learning environment and experiences possible,” he says.

Rodriguez recognizes the importance of spreading the word about Vizling to gain traction with his product and help these students. He recently participated in a panel titled "Adapting Comics for Blind and Low Vision Readers" hosted by Nick Sousanis, who wrote his dissertation as a comic at Columbia University.

In front of an international audience of about 400, and alongside such notable scholars, artists, and advocates for the disability community such as Scott McCloud, Sky McLeod, Chancey Fleet, and Darren DeFrain, Rodriquez spoke about the benefits his app provides for the public.

“Aaron not only held his own in the roundtable discussion, but I believe he articulated the most substantial and nuanced idea for making comics accessible, representing his project, his research, and FSU brilliantly,” says English Associate Professor Michael Neal, director of FSU’s Rhetoric and Composition Program.

For Rodriguez, he believes people should not be asking “why” this app should be developed, but rather “how” they can help the blind and visually disabled community.

“Not enough is being done for blind and visually impaired students, but I think that everybody has the right to have equitable and accessible translations of comics, regardless of whether they can see or not,” he says.

Currently, comics are not very accessible to BVI students. In order to read comics, these students must go to the Disability Services Center on campus and have someone else read to them. Therefore, that will likely be about two hours a week on their own time in order to understand the layout of the comic or graphics that they are trying to interpret.

Unfortunately, COVID-19 has taken that opportunity away. Now, the only option is a text-based version that gives the student a “Cliff Notes experience” of comics, as Rodriguez calls it. The app is not currently available on the Google Play or Apple App Store as it is still in the user testing phase, but Rodriguez points out there are still ways to help in the development of Vizling. He recommends students, graduate and undergraduate, can create a buzz around the product to help spread the message of its importance.

Additionally, he encourages students to participate in funded studies that he is holding with Neal during the summer academic sessions. These studies will help him gain more information to better adapt the Vizling App.

Through his research work with the English department and his devotion to co-found Vizling, Rodriguez demonstrates how a combination of smarts and selflessness can truly make a change in someone’s world.