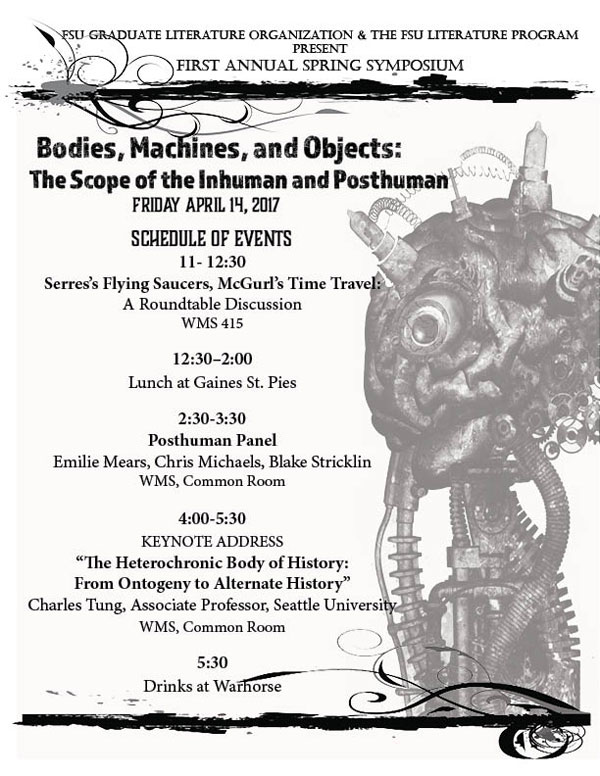 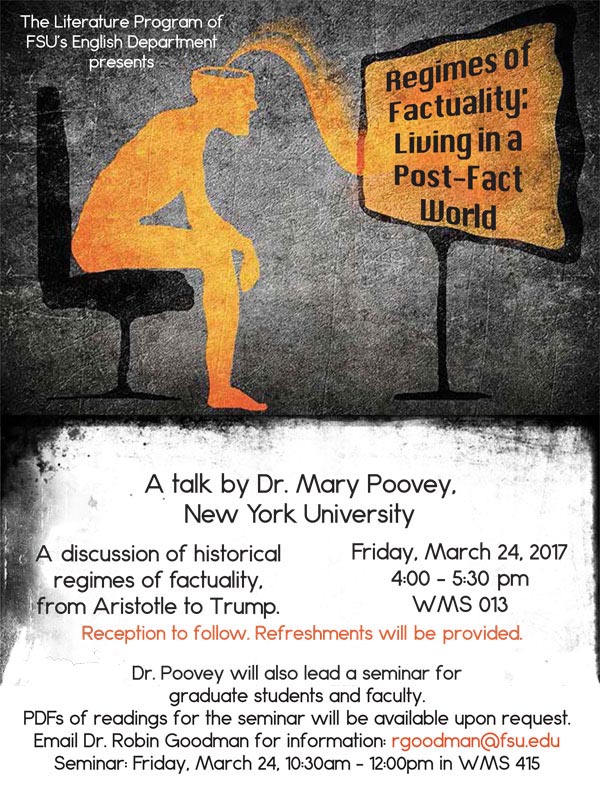 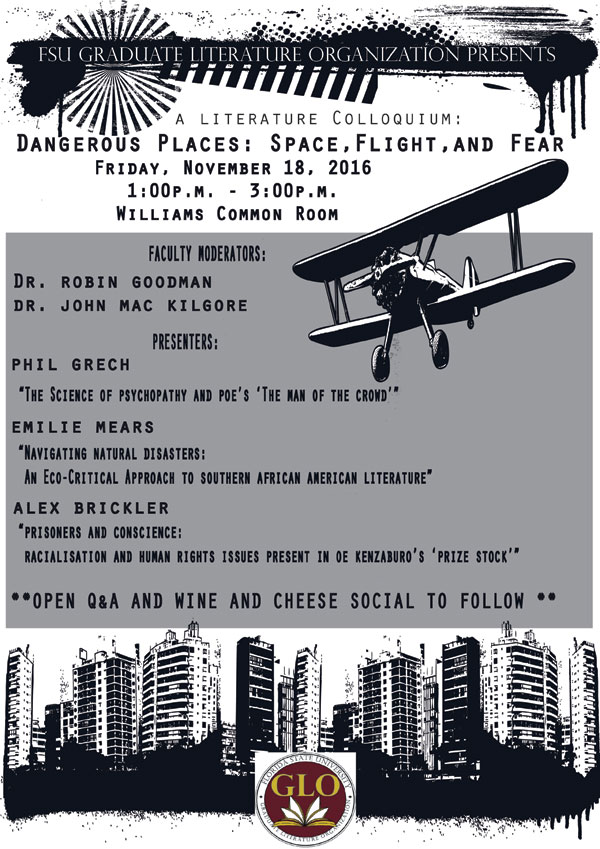 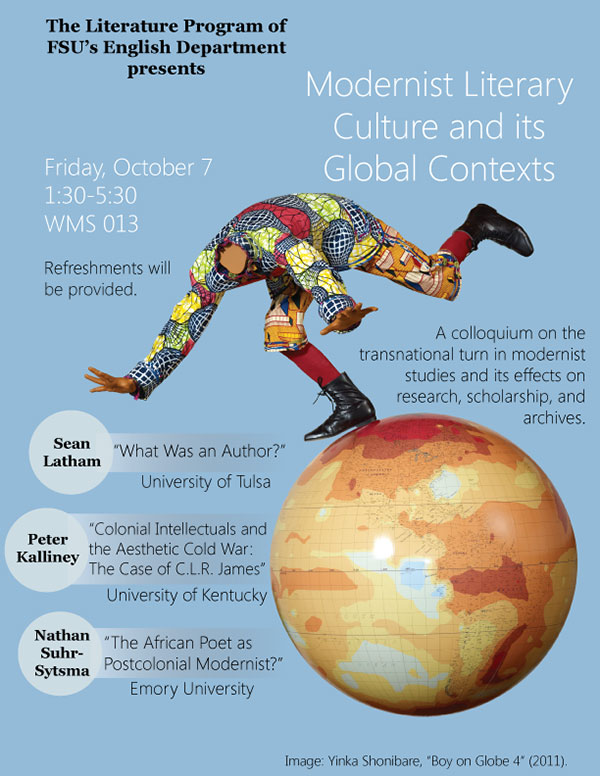 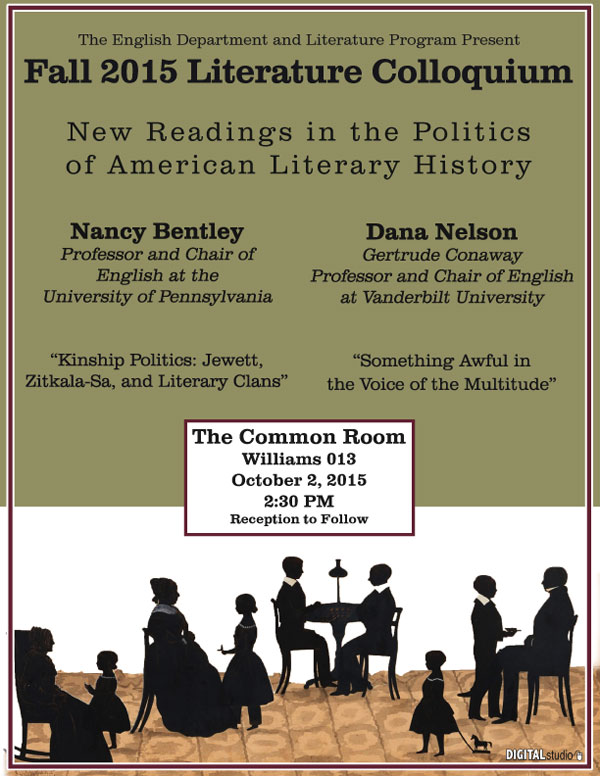 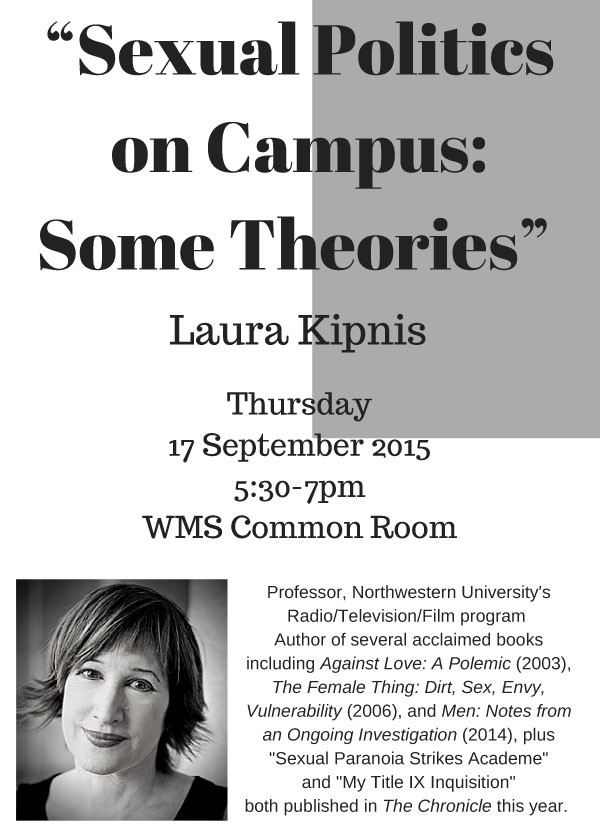 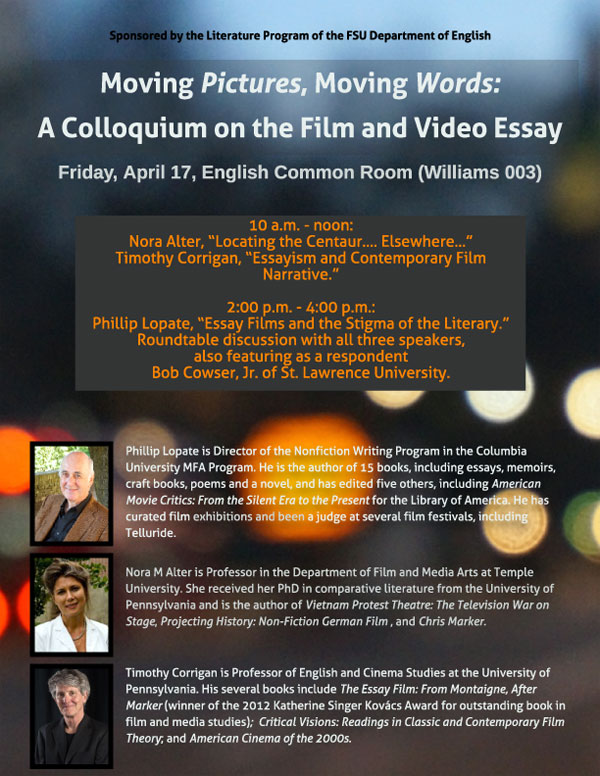 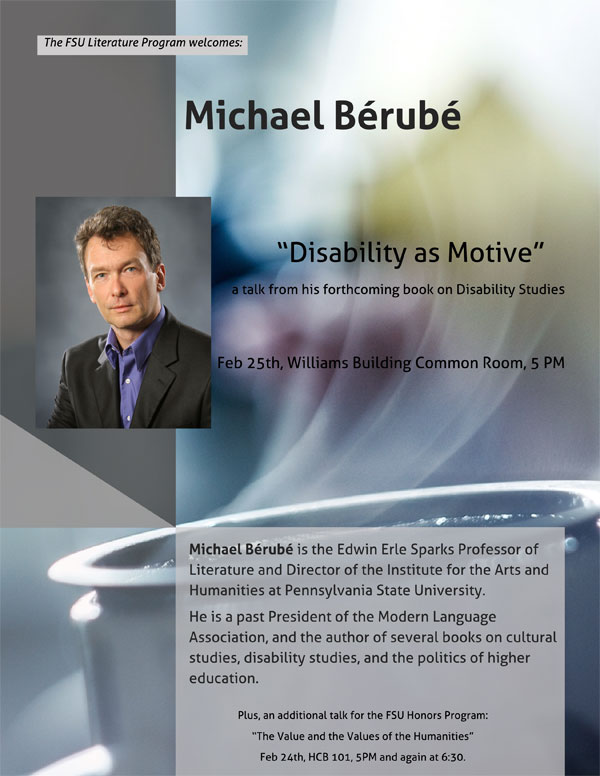 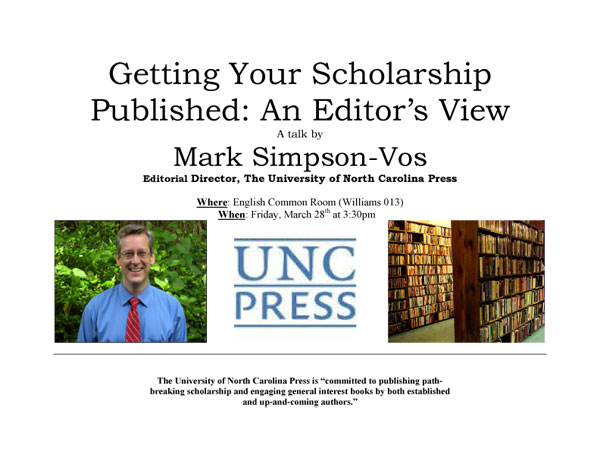 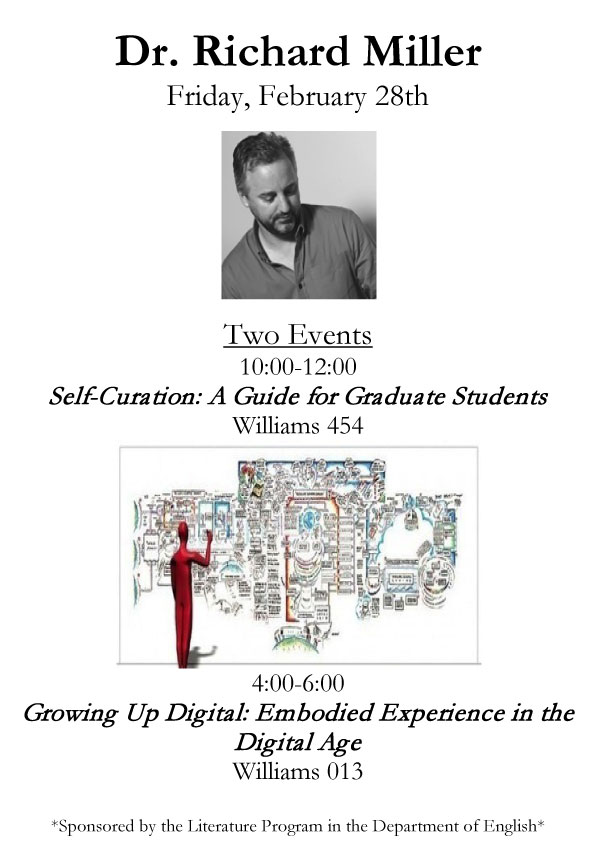 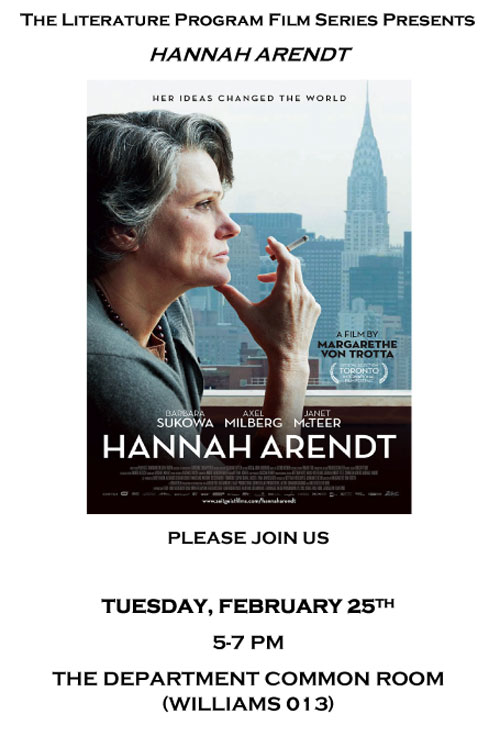 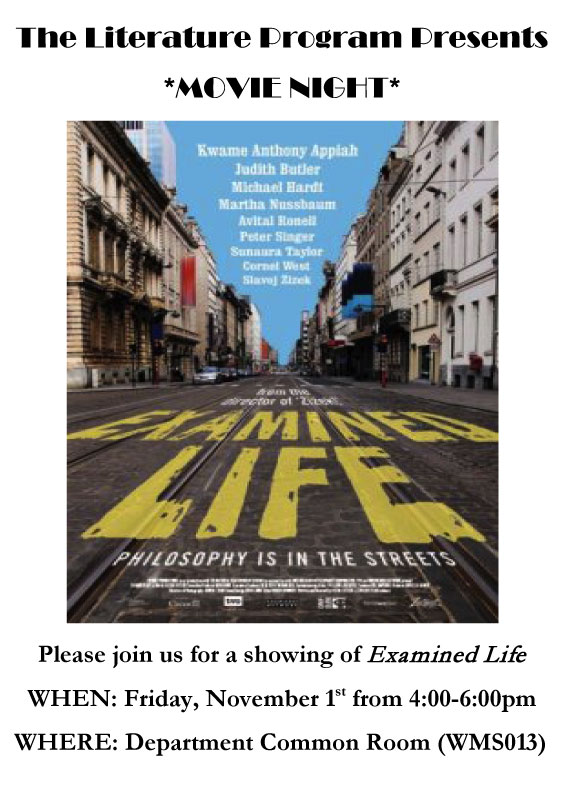 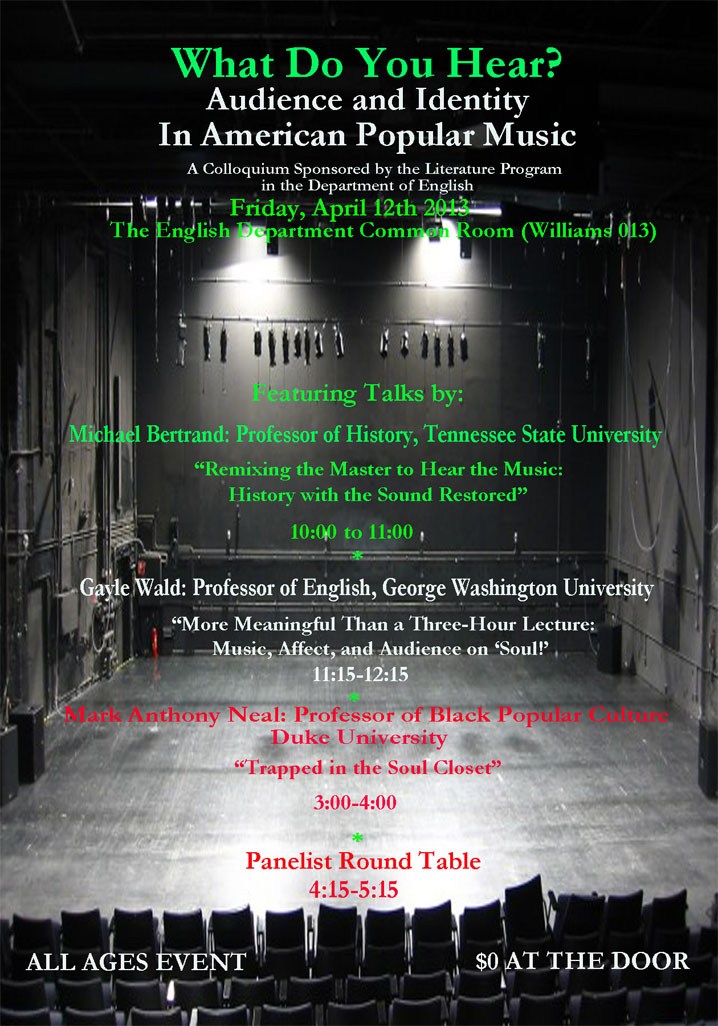 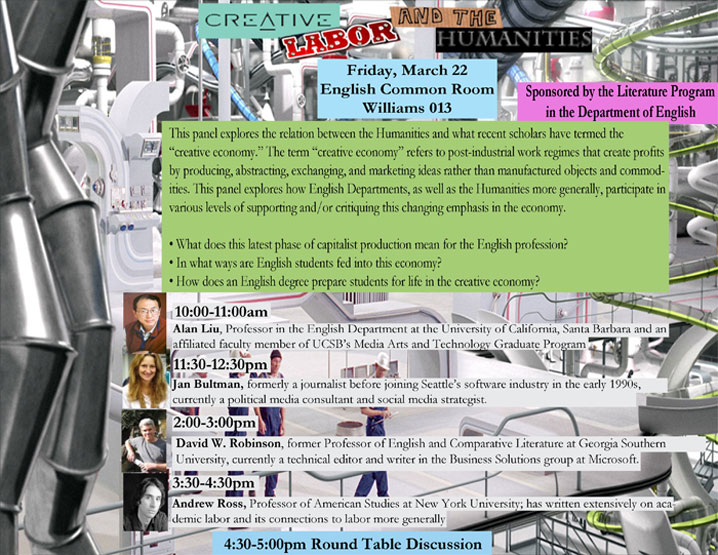 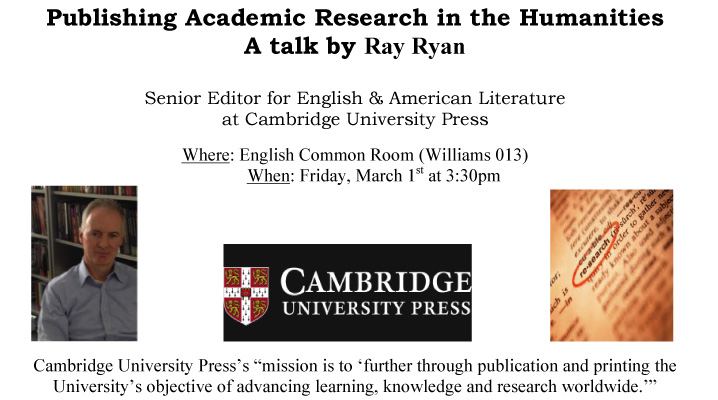 Feminism and Social Justice: The Story of 'No'
Williams 013
3pm on Thursday, January 24th 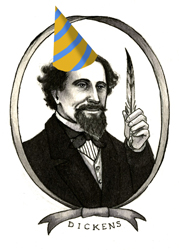 In honor of the 200th anniversary of Charles Dickens' birth, FSU will be reading aloud Bleak House, his most highly acclaimed novel. Over two days and in approximately 30 hours (from 10am on October 2nd to 4pm on October 3) more than 100 FSU students, faculty, and staff will read aloud for 15 minutes from this classic English text.

Wear your birthday party hat if you like, but invite your friends and come along to read with us. No previous knowledge of Dickens required!

Publishing in the 21st Century
A talk by Robert Sloan, an acquisitions editor with Indiana University Press When: Thursday, April 19, 2012
[listen to this presentation] 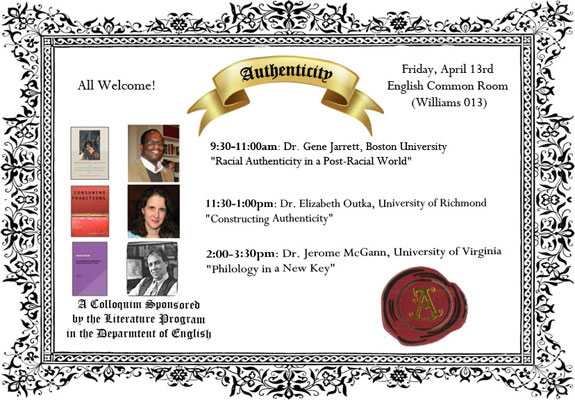 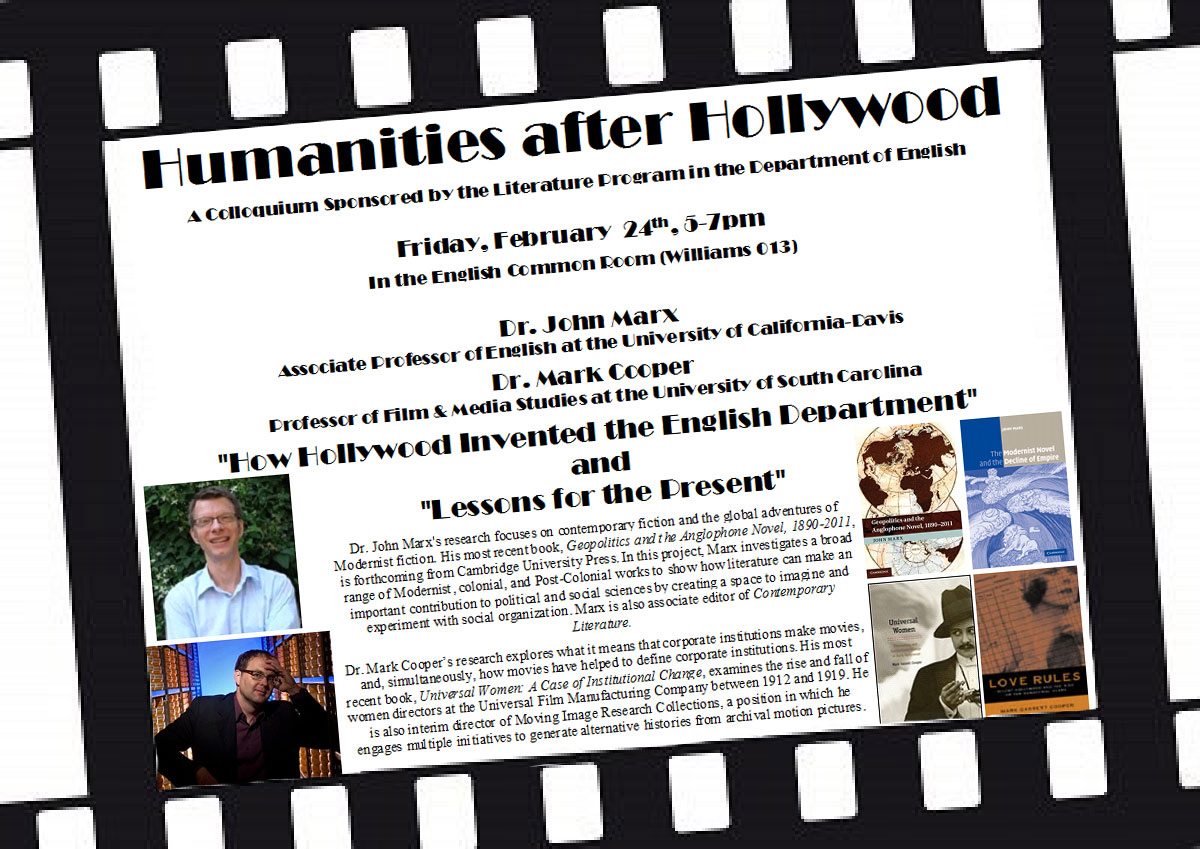 Audio Recordings of "Humanities After Hollywood"

Recording 2: "Lessons for the Present" 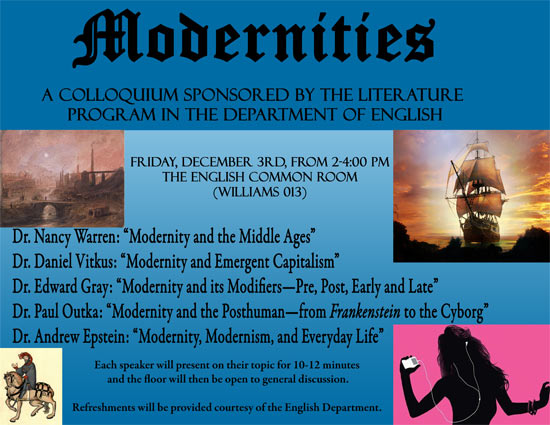 "How Hollywood Invented the English Department"

"Lessons for the Present"

In the English Common Room (Williams 013)

Dr. John Marx's research focuses on contemporary fiction and the global adventures of Modernist fiction. His most recent book, Geopolitics and the Anglophone Novel, 1890-2011, is forthcoming from Cambridge University Press. In this project, Marx investigates a broad range of Modernist, colonial, and Post-Colonial works to show how literature can make an important contribution to political and social sciences by creating a space to imagine and experiment with social organization. Marx is also associate editor of Contemporary Literature. 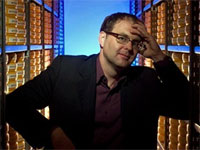 Dr. Mark Cooper's research explores what it means that corporate institutions make movies, and, simultaneously, how movies have helped to define corporate institutions. His most recent book, Universal Women: A Case of Institutional Change, examines the rise and fall of women directors at the Universal Film Manufacturing Company between 1912 and 1919. He is also interim director of Moving Image Research Collections, a position in which he engages multiple initiatives to generate alternative histories from archival motion pictures. 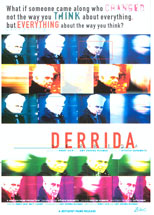 A unique portrait of Jacques Derrida, one of the most polemical and influential theorists of the end of the 20th century. The film is composed of interviews shot by the filmmakers, Derrida's lectures and speaking engagements, and footage of Derrida's personal life. The filmmakers appropriately explore and push the limits of the documentary genre as they "deconstruct" the French thinker's private and professional life in an attempt to capture the processes of an inquisitive and iconoclastic mind whose theories have completely altered the way we look at history, language, art, and film. 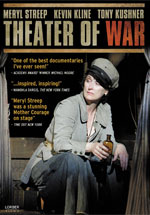 This film investigates Bertolt Brecht's motives and politics through a Public Theater production of Mother Courage and Her Children. This performance of Tony Kushner's post-9/11 adaptation of Brecht's classic play was produced in downtown New York, just blocks from Ground Zero. The film cuts Brecht's experience of war and exile in the turbulent Europe of the 1930's, when the play was written, with its re-interpretation in the context of America's political and cultural trauma. The film also offers an exclusive look into the craft of actress Meryl Streep, whose performance of Mother Courage was widely acclaimed. Ultimately, the film provides unique critical insight into Brecht, 21st century America, and the craft of theater.