Reinventing Shakespeare: A Cultural History, from the Restoration to the Present 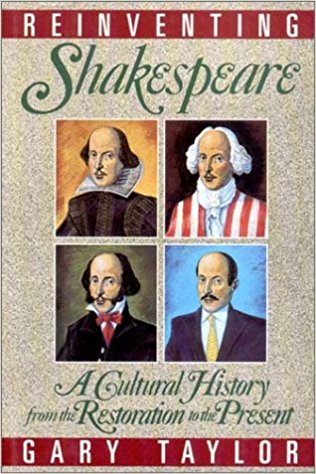 As an actor, William Shakespeare reinvented himself almost every day. At the height of his career, he often performed in six different plays on six consecutive days. He stopped reinventing himself when he died on April 23, 1616, but, as Gary Taylor tells us in this bold, provocative, irreverent history of Shakespeare's reputation through the ages, we have been reinventing him ever since.

Taylor, who sparked a worldwide controversy in 1985 by announcing his discovery of a "new" Shakespeare poem "Shall I die?," presents a brilliantly argued, wryly humorous discussion of the ways in which society "reinvents" Shakespeare--and to some extent all great literature--to suit its own ends. He reveals how Shakespeare's reputation has benefited from such diverse and unpredictable factors as the dearth of new plays after the Restoration; the decline of tragedy in the eighteenth century, when, as Taylor puts it, "Shakespeare was kept on the menu because he was the only serious dish [the repertoire companies] knew how to cook"; the changing social status of women in the nineteenth century; England's longstanding rivalry with France, which turned Shakespeare into the great advocate of conservative British values; and the current trend in academia toward shockingly unorthodox views, which has turned Shakespeare into the great ally of radical Marxist and feminist critics.

Through the centuries, critics have cited the same Shakespeare--often the very same play--as the supporter of a vast array of world views. Examining each period's method of invoking the Bard's "greatness" to support a series of conflicting values, Taylor questions what actually constitutes greatness. He insists on examining the criteria of each epoch on its own terms in order to demonstrate how literary criticism can often become the most telling form of social commentary. Reinventing Shakespeare offers nothing less than a major reevaluation of Shakespeare, his writing, his place in world history, and the very bases of aesthetic judgment.