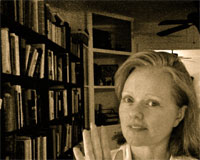 Hundreds of years from now, historians and digital scholars will be studying the modern-day technology and media revolution, examining its impact on societies and cultures. For a deeper understanding of those changes and their roots, researchers in the future would be wise to read Anne Coldiron's most recent book, Printers without Borders: Translation and Textuality in the Renaissance (Cambridge UP, 2015).

Although her study covers the period from 1473 to the end of the Elizabethan era, Coldiron believed from the project's beginning there would be connections between today's textual landscape and the timeframe for her analysis.

In that earlier age of information revolution, two kinds of textual technologies—printing and translation—worked synergistically to create astonishing changes in literature and culture," she said in 2010, after the National Endowment for the Humanities awarded her a yearlong fellowship, which allowed the research time she needed for her book. "In the current information revolution, we, too, are experiencing the transformative powers of translation and 'info-tech' and, together, they connect cultures and shake up our basic assumptions and habits. But, because the analogy between the old and new textual revolutions is imperfect, it needs to be historicized and contextualized. That is the goal of my project."

The result of her work is a book of 10 case studies. Her research covers nearly a century and a half of history and literature and required her to work with several different languages and their traditions.

"I'm exhausted and relieved that the book is published—it was a long, hard slog," she says.

When she talks about the subject matter, however, Coldiron's enthusiasm for it comes through clearly, especially when she speaks about the translation components.

"Translation is not just some technical process or instrumental procedure, where someone takes a book and reproduces it in another language," she says. "It is an engine for change and growth. Translation is where innovations in one literature are imported into another literature, obviously, but then they get changed up and twisted up by the history of that new literature into which they come."

Coldiron used polysystems theory as one of her guiding principles during the research process, pointing out that literary cultures change at different rates and are on their own independent tracks, and further explaining that both are changed through translation when they come into contact. Researchers, she adds, have always known that the translating culture gets its new material from another culture.

"But what hasn't really been understood is how translation is an agent of cultural change, of social change, of political and economic change, and of, obviously, literary and aesthetic change," she says. "The minute you have a translation, you have an entire literary history imported into the space you're in and you have access and contact with other cultures in ways that you just don't get with other ways. Travel's nice, diplomacy's nice, trade's nice, immigration is nice—all of that is important—but translation gives you the most intense hit of the culture."

The first case study in Printers without Borders focuses on William Caxton, who translated and printed the first book in English, Recuyell of the Hystoryes of Troye, from its original French language. Caxton did not just translate the stories, Coldiron says, he made "an important cultural product available to a mass of new English readership at a crucial moment for stories about empire."

Still, every translation is an interpretation, Coldiron points out, and she stresses that the process is not always pure. Translators are important agents of change, she says, but they can bring in their own agendas—based on their education or positions in the culture—while sharing their ability to see multiple perspectives at once.

"Some translators are just quirky and fun," Coldiron says, but researchers in the field know that outside political or economic forces sometimes motivate translators, and questions about the person's ideologies must be addressed.

"Like all writers, they have certain fingerprints, and you just know that a translator is going to do a certain thing with this particular material," she says. "It's fun to get to know your translator."

The study of translation requires a wide scope, Coldiron says, pointing out that researchers have to consider factors such as what is present in both of the two cultures to make the translation viable, what the new readership is getting from the translation, and the aesthetics of the translation.

Reviewers for the book praise Coldiron for her ability to do just that and for her adept writing.

"Anne Coldiron demonstrates a remarkable interdisciplinary range, with literary, historical, philological and bibliographical readings of texts and evidence deftly woven together. This book is a must-read for anyone interested in the transmission of early modern literature and culture, the history of books and printing, and the role of knowledge technologies in early transnationalism," writes Alan Galey, associate professor in the Faculty of Information at the University of Toronto. Ruth Morse, a professor at the Université Paris Diderot VII, writes, "Anne Coldiron possesses an unusual combination of gifts and a rare intellectual bite. This is an important book, with implications that reach well beyond much work in the new field of the material text, cultural history, or, indeed much of what we thought we knew about how texts travel."

The other case studies in the book include "some canonical texts but many uncanonical texts," Coldiron says. For example, a chapter is devoted to Book of Courtier, which "may be the most important book in the entire European Renaissance," but Coldiron also writes about the first book translated from Arabic: "Foreignness became extremely important in the new media revolution of the 15th and 16th centuries," she says.

Her chapter on biblical imagery explores a popular genre of the time called the figura—"little Bible pictures with poems underneath"—which were extremely popular in the Renaissance, with hundreds of editions and widespread throughout Europe. In fact, a lot of books that were important in that culture do not register in the current literary canon, Coldiron says. "We study just Spenser, Sidney, Milton, Donne, but that does not reflect what Renaissance readers were actually reading, so I tried to reflect what was actually valued and read, and what made a big splash then."

An octolingual broadside made in celebration of the Armada events is featured on the book's cover, and Coldiron assigns an entire chapter to the eight poems in eight different languages printed on the broadside. Her analysis looks at how the translation and the printing worked together; one example in this case is that different typefaces were used for each of the different languages. Printers did this, she says, "not only to visually distinguish the languages but also to ally that aesthetic of the typeface with the language and the tradition they are working in, the poetic forms with which the sonnet is associated."

Ultimately, when the scope of her project is widened, Coldiron considers Printers without Borders as an intervention in canon formation. Since courses and departments in America are organized along monolingual and national lines, with English and American literature in a separate departments from French and Italian literature, for example, that structure invites a monocultural focus, she says. In fact, her research shows "the European early modern period as richly polyglot, a multinational, multicultural endeavor where contact with the other was formational, foundational, and pervasive. It animated a lot of what's going on in the culture and we need to register that." Printers without Borders "invites us to take off the monoglot blinders and see how literary change actually worked instead of how the 19th-century canon founders set it up to work."

As her discussion of the book comes back around to connections between her research and the present-day media revolution, Coldiron acknowledges that it might not be a perfect analogy but she argues there are intriguing parallels between today's media revolution and the one that took place in the late 15th and early 16th centuries.

"I would say that the early phase is the big earthquake and ours is the aftershock," she says. "This one today would certainly not be popular without that one, under any circumstance."

With Printers without Borders finished, Coldiron has turned her attention to writing academic articles on translation and other projects related to the subject matter. She recently concluded a leadership role for a yearlong Folger Shakespeare Library colloquium, and the group is putting a collection together called the Translator's Voice in Early Modern Literature and History. In 2016, Coldiron will give a plenary talk in Paris and invited lectures in the UK on the topic of translation.