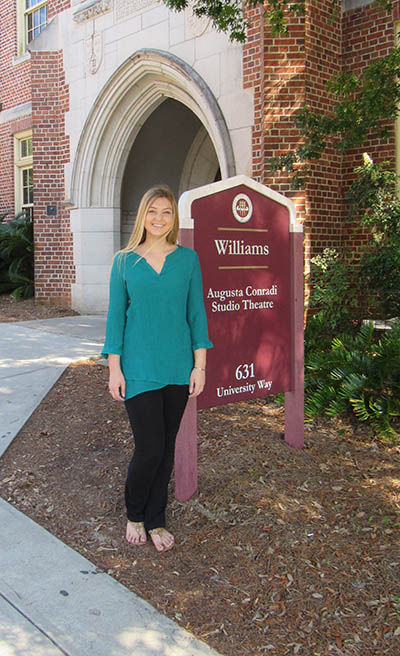 In her sophomore year at Florida State University, Rebecca had the privilege of participating in the Undergraduate Research Opportunity Program (UROP), when she was a research assistant under Danielle Wirsansky, working together to create an original musical for Holocaust education. Along with Grace Hayes, another UROP student, the three brought the musical to the stage during the Spring 2018 semester. Rebecca did historical research on the period—specifically 1942 Germany and the Sobibor concentration camp—along with another researcher, and edited the book of the musical, which Danielle Wirsansky wrote. While Grace Hayes composed all original music for this production, Rebecca and Danielle served as co-lyricists, amplifying their message and story through song. Rebecca and Grace applied jointly for an IDEA Grant after working on this project for a year and joining on as full-time researchers. Over the summer, Grace re-wrote nearly half of the music, while Rebecca and Danielle wrote new lyrics and updated the storyline based on feedback received at a workshop concert. After having the pleasure of watching the cast bring this story to life in Spring 2018 on the Augusta Conradi Studio Theater stage, their work on this project came to a close. The group is currently in the process of making a cast recording and getting a copyright for the script, with the aim of sending the show to professional theaters to share the message with a wider audience. Rebecca is graduating in Spring 2018 and plans to move to Washington, D.C. to pursue a job as a copy editor: “While this is an exciting, and somewhat scary, next step, I know I am prepared for the future with the FSU community to support me.”