Revising the Clinic: Vision and Representation in Victorian Medical Narrative and the Novel 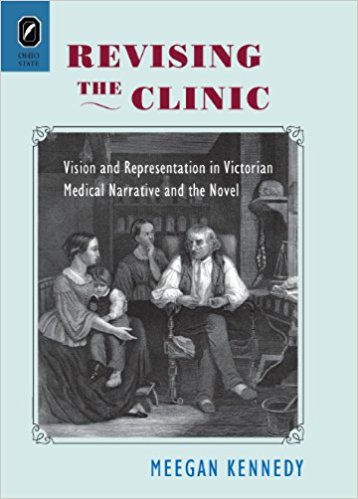 Revising the Clinic: Vision and Representation in Victorian Medical Narrative and the Novel, by Meegan Kennedy, surveys hundreds of primary sources in a provocative new argument about visual knowledge. Kennedy argues that Victorian novelists and physicians jointly fret over “seeing and stating”: how to observe the world and how to record it. She shows how the clinical gaze and voice, never uncontested, function in medical texts and novels within a range of possible modes of vision and narration.

Critics have examined how novelists borrow from other genres—newspapers, legal cases, autobiographies. Medical writing likewise enriches the novel’s uniquely flexible and wide-ranging presentation of Victorian culture. In turn, the novel shapes medical narrative even as clinical science idealizes methodological rigor. Revising the Clinic shows how the wealth of scientific material in mainstream Victorian periodicals creates a productive literary “commons” where novelists and physicians can encounter each others’ strategies for seeing and stating. Novelists adapt physicians’ techniques to nonmedical scenes, and physicians echo the sentimental or sensational novel to gain sympathy or rhetorical force when medical knowledge falters.

Kennedy traces the development of the Victorian novel and the case history from eighteenth-century curious observation and curious sights through nineteenth-century clinical observation, mechanical observation, and speculation, to Freud’s labyrinthine mapping and speculative insight. These make new sense, read within the literary tradition of the case history. The lens of Kennedy’s argument clarifies and illuminates the preoccupation with genre and visuality that is common to Victorian medicine and the novel.