Seriously Funny: Poems about Love, Death, Religion, Art, Politics, Sex, and Everything Else 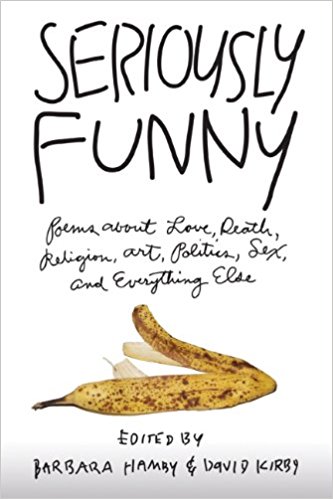 Can serious poetry be funny? Chaucer and Shakespeare would say yes, and so do the authors of these 187 poems that address timeless concerns but that also include comic elements.

Beginning with the Beats and the New York School and continuing with both marquee-name poets and newcomers, Seriously Funny ranges from poems that are capsized by their own tomfoolery to those that glow with quiet wit to ones in which a laugh erupts in the midst of terrible darkness.

Most of the selections were made in the editors’ battered compact car, otherwise known as the Seriously Funny Mobile Unit. During the two years in which Barbara Hamby and David Kirby made their choices, they’d set out with a couple of boxes of books in the back seat, and whoever wasn’t driving read to the other. When they found that a poem made both of them think but laugh as well, they earmarked it.

Readers will find a true generosity in these poems, an eagerness to share ideas and emotions and also to entertain. The singer Ali Farka Touré said that honey is never good when it’s only in one mouth, and the editors of Seriously Funny hope its readers find much to share with others.