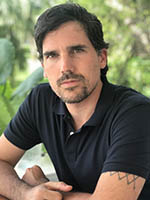 Maurette specializes in Early Modern comparative literature and the Classical Tradition and his approach is trans-historical, multilingual, and interdisciplinary. His research focuses on the intersections between literature, science, and the history of ideas in the period between 1400 and 1650 in England, Italy, France, Spain, and the New World.

In 2018, he published The Forgotten Sense: Meditations on Touch (The University of Chicago Press), a collection of essays dedicated to the role that the sense of touch has played throughout the Western literary and philosophical tradition, from Homer to Karl Ove Knausgaard. His current book project centers on scientific conceptions and literary depictions of monstrosity in Early Modern Europe from a Transatlantic perspective, focusing on attempts to classify, categorize, demonize, and redeem a monstrous "other" during the time of the first encounters between Europe and the New World.

Maurette also writes for wider audiences in Lapham’s Quarterly, La Repubblica (Italy), and Perfil (Argentina). He has published two books of essays in Spanish and his first novel is forthcoming in Argentina and Spain in 2020.