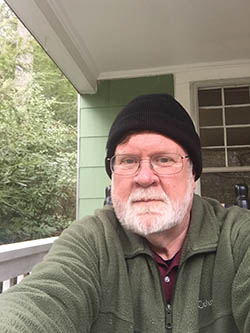 ERIC WALKER, Professor of English and Chair of the department from 2012-17, has been a member of the English department since 1984. From 2009-11, he served as President of the FSU Faculty Senate and a member of the FSU Board of Trustees. He was the recipient of the university's Distinguished Teacher Award in 1996, in addition to numerous other teaching honors at FSU and elsewhere in the profession. Prof. Walker has served two terms as Associate Chair of the department, from 1988-93 and from 2006-09, and served as an Assistant Dean in the College of Arts and Sciences from 2004-06.

Dr. Walker specializes in 18th and 19th century British literature and is the author of numerous journal articles and the book Marriage, Writing, and Romanticism, published by Stanford University Press in 2009. He is a graduate of Davidson College in North Carolina and holds advanced degrees from the University of Aberdeen in Scotland (M.Litt.), where his study was funded by the St. Andrews Society of New York, and from the University of North Carolina at Chapel Hill (M.A. and Ph.D.), where he was the recipient of the Earl Hartsell Award for Excellence in Teaching. His current work is in adoption studies, for a book on Romanticism and Adoption.