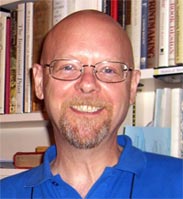 DAVID L. GANTS, (Ph.D., University of Virginia, 1997), works on the history of printing and publishing at either end of the Gutenberg age, focusing on both the emerging European printing trade 1450–1700 and the current digital transformation taking place in the industry. He has published widely on descriptive and analytical bibliography, the early London book trade, and the overlap between bibliographical and digital humanities scholarship. Dr. Gants joined the FSU faculty in the fall of 2007 as part of the interdisciplinary Pathways of Excellence History of Text Technologies program.

He is the Electronic Editor for the Cambridge Edition of the Works of Ben Jonson (2012) and Cambridge Edition of the Works of Ben Jonson Online (2014), a ground-breaking enterprise trailblazing a new model for electronic scholarly editing. Dr. Gants is also the editor of The Papers of the Bibliographical Society of America, a journal published by the University of Chicago Press and Bibliographical Society of America, the oldest scholarly society in North America devoted to the study of books, manuscripts, and the history of printing and publishing. He is currently finishing a book project, “The Book as a Material Object: An Introduction to Descriptive Bibliography.”

Dr. Gants has served on a large number of boards and committees, including the Executive Committee of the Association for Computers and Humanities, the Council of the Bibliographical Society of America, the Executive Committee of Society for Textual Scholarship, and as the Chair of the Textual and Bibliographical Studies Section of the South Atlantic Modern Language Association. He currently is a member of the Advisory Board for the Oxford Works of Edmund Spenser, the Oxford Works of James Shirley, and the New Oxford Works of William Shakespeare. He is also a member of the Executive Board of the English Short Title Catalogue.