For each year of her appointment, Dr. Yancey is editing a special issue addressing key topics in rhetoric and composition.

Peitho Special Issue - "The Critical Place of the Networked Archive" 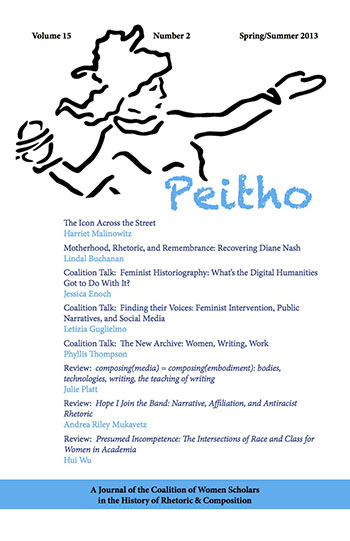 Special Issue - "The Critical Place of the Networked Archive" - Peitho is the flagship journal of the Coalition of Women Scholars in the History of Rhetoric and Composition and Fall/Winter 2014 marks its first special issue, dedicated to "The Critical Place of the Networked Archive" and guest-edited by Tarez Samra Graban (FSU) and Shirley K. Rose (ASU). This special issue enacts a multi-perspectival examination of networked archival scholarship on early 20th-century women's suffrage. Seven contributors work with a digitized collection of cartoons by Chicago Tribune illustrator John Tinney McCutcheon, that depict the woman's suffrage movement in Great Britain and the United States, using multi-, inter-, and cross-disciplinary methodologies to question the means (and screens) by which views of British Suffrage circulated "at home and abroad." In response to his depictions, they articulate unique perspectives they have discovered—based on the material artifacts themselves, the contexts from which they arose, or the digitized contexts and metadata in which they continue to abide—for viewing work by McCutcheon and other 20th-century cartoonists, raising questions about how new audiences, contexts, and movements can emerge from such a transnational digital space.

Kristie Fleckenstein (FSU), Jaque McLeod Rogers (U Winnipeg), Sarah Skripsky (Westmont College), Jason Barrett-Fox (Arkansas), Tarez Samra Graban (FSU), Oriana Gatta (GSU), and Shirley K Rose (ASU) use the event of this digitized archive as their foundation for demonstrating a range of critical and imaginative perspectives that re/place historiographic methodologies in the spaces between methods and modes of historical inquiry. All contributions study histories of national accessibility alongside facts of global circulation and media ecologies, and all contributions are guided by an ethic of identifying and making accessible various sets of resources for repurposing and recirculating by diverse scholars, for multiple purposes.

ATD Special Issue-"Writing across the Curriculum and Assessment: Activities, Programs, and Insights at the Intersection"

A Special Issue of Across the Disciplines, which was released in December 2009 http://wac.colostate.edu/atd/assessment/index.cfm, focused on Writing across the Curriculum and Assessment. The Editorial Team received more than 30 proposals. The authors of the introduction idenitified five questions deriving from the individual articles: