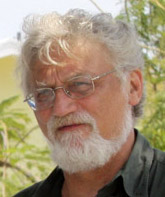 BOB SHACOCHIS, Writer-in-Residence, MFA, Iowa Writers' Workshop (1982), specializes in fiction and non-fiction. His first collection of stories, Easy in the Islands, won the National Book Award for First Fiction in 1985, and his second collection, The Next New World, was awarded the Prix de Rome from the American Academy of Arts and Letters in 1989. Bob Shacochis is a former columnist for Gentleman’s Quarterly and a contributing editor for both Outside and Harper’s. A collection of his columns for GQ, Domesticity: A Gastronomic Interpretation of Love, was published by Scribner in 1994. Swimming in the Volcano, the first book in a projected trilogy, was a 1993 National Book Award Finalist. The Immaculate Invasion, a chronicle of the 1994 military intervention in Haiti, was a finalist for The New Yorker Magazine Award for best nonfiction of 1999. He has also received a James Michener Fellowship and a grant from the NEA.